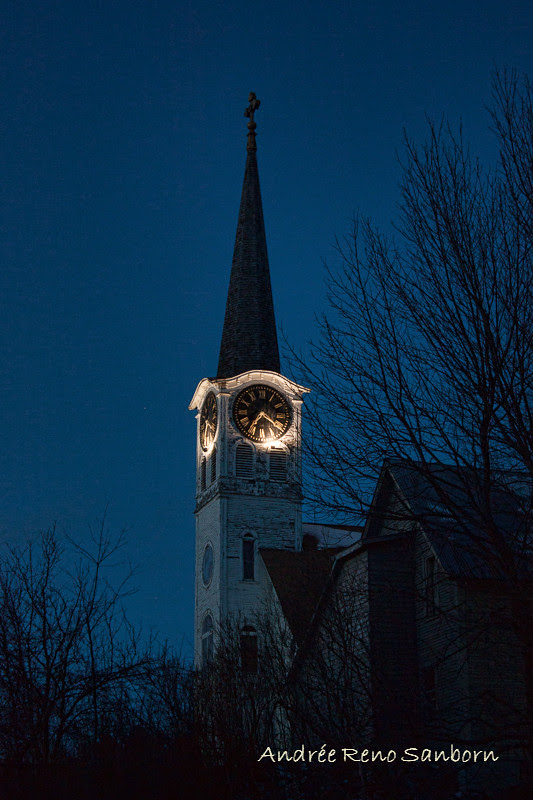 (I thought it has been long enough since my last post in March!)

Beavers on the Move 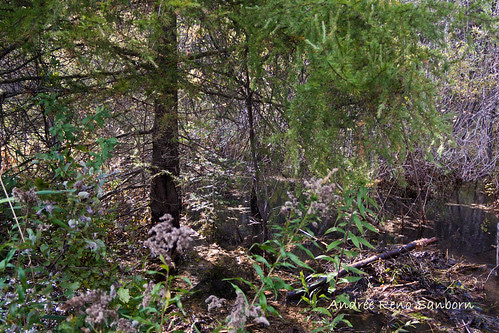 What you would have seen when walking in from the road.

Last October the beaver from the bog had some sort of population explosion. The kids had to move out and make their own house. They chose to move across the road to our side. There is a huge culvert that drains water from a low lying grove of tamarack and apple trees. It is less than a quarter mile from the house. John noticed in October that the area was flooded. Deeply flooded. So he went to check it out. That's when he found the new beaver dam across the culvert. The new pond was about four feet deep and filling quickly. We would have a huge problem if there was a heavy rain or if the future finished dam broke. It could wash out our driveway, the culvert and the road.. 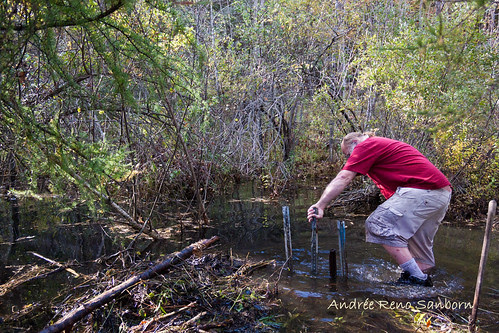 John manually clears out the dam from the culvert.
He is standing on top of the new dam.
Note those 6 foot tall fence posts marking the culvert. 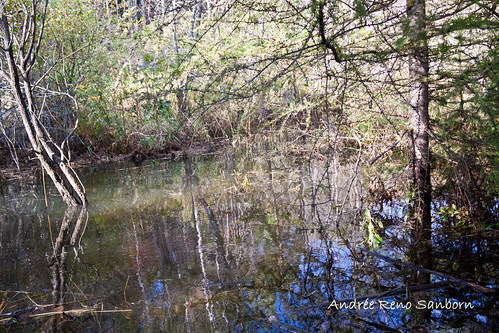 John spent a lot of time and effort in clearing the dam from the culvert. He did it one Sunday morning and for a few weeks after that, once a week, because the beaver kept repairing the damage. The beaver seemed to give up at that point and did not rebuild.

But after nearly six weeks of quiet, they rebuilt the dam. This time, they built it deep inside the culvert, under the road, where neither John nor his tractor could reach it. John then called the town road agent, Clem, who had installed our culvert. Clem sent the town road crew that very day. They used the town's huge backhoe and hauled out the new, heavily fortified dam. Then they installed a heavy road grate to prevent the beaver from ever entering the culvert again. 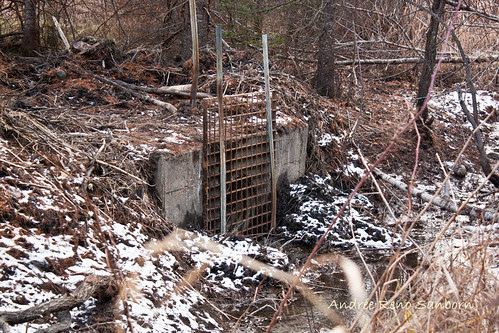 The new heavy grate blocking the culvert. Note those same fence posts from above.

Below are some photographs of the damage in the same area. We returned on a hike in December to see what was going on. The damage was quite extensive. The area was trashed (in a nice, beaver sort of way): 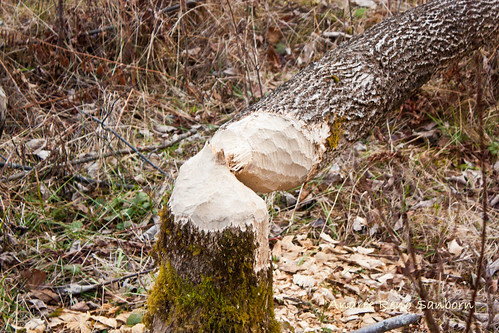 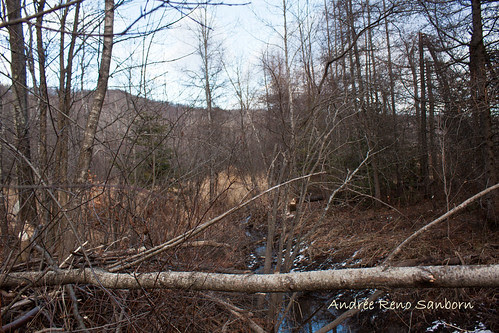 This is what that new beaver pond looks like now. It is drained. 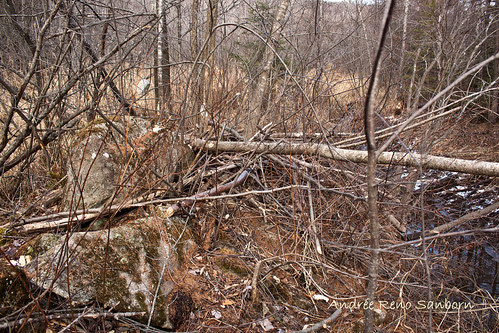 The remains of a lodge that was being built behind the dam. 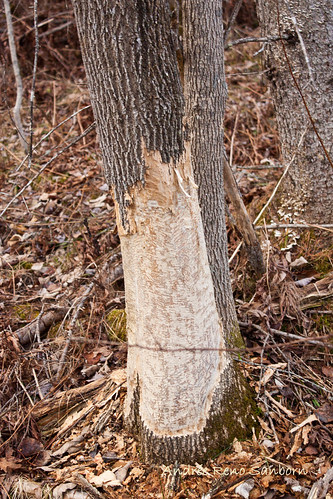 Many trees were only partially cut or were being considered for cutting. This tree will die.

The beaver may have been discouraged. They may even have despaired. But they were never threatened. After the town blocked the culvert, they continued to cut down trees on both sides of the road and built a new lodge where it should have been built: in the beaver bog. This is the fourth lodge across the road now. It has new canals and trails, and new log slides going into the water. I'm glad the trees, such as they were, are gone, because now the view of the bog is clearer. 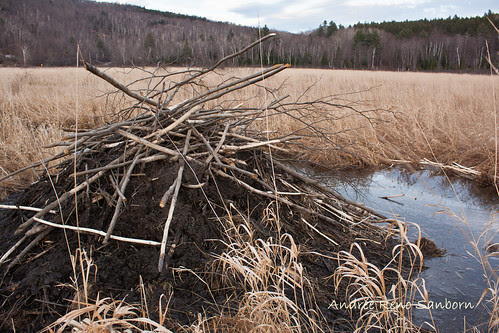 The new lodge. Where it should be.

The funniest tale of these beaver has not yet been told. In January, I went for my monthly hair appointment and heard the strangest story from my hairdresser, who frequently drives by on her way into town. She was driving by one day about noon and saw by the side of the road a big beaver. He was waiting for her to drive by, looking both ways before he crossed. And what did he have in his mouth? A reflective road side marker that marks the culvert so that the town road crew does not damage it with the plows. The beaver had cut it down and was taking it home to decorate his lodge! 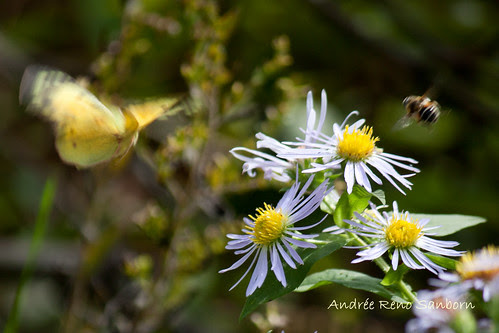 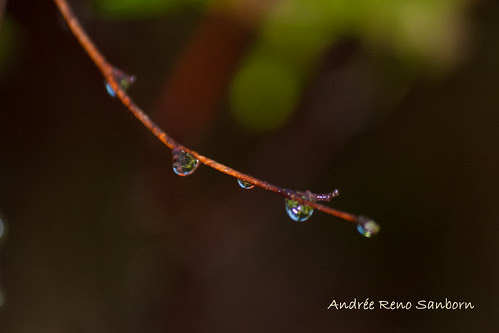 I remember September 20, 2011 because of the weather. I came home from school feeling that classes hadn't gone as they should. I had to get outside but it was raining. I could tell that no birds were about and the rain would make all the bugs disappear. The cats felt they had to get out, too. The rain stopped so we went. Desperate, I began taking photographs and found these to shoot. And I found my bug. 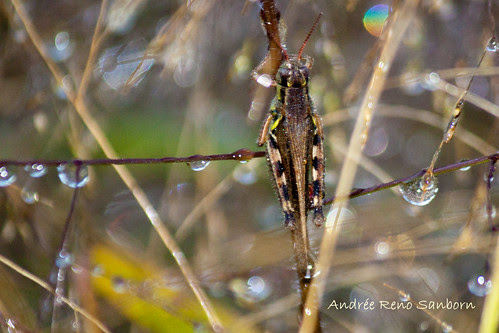 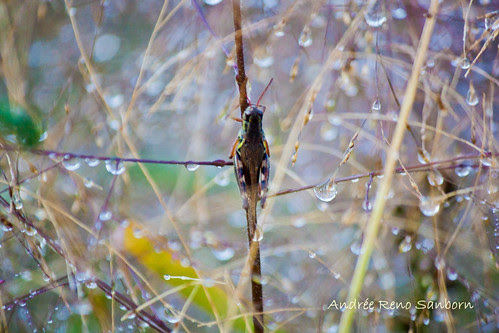 I have put my favorite Wet photograph on my Photo a Day blog . . . . here.