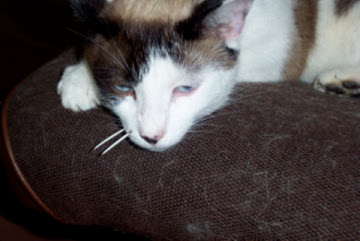 Yesterday we went to my mother's house to deliver corn that Sarah B., a CCV student of mine, had given me when she stopped at the house Saturday to drop off papers that had been due a week before. The dogs had not been in her fields since the cows had started coming up for the night and they went nuts. They ate the cow flops, and then rolled in them. It was nearly impossible to get them to run through the fields and work off their energy. Amy hosed them off before they got into the car but they were still stinky, and oh so stinky! I felt like I had brought the manure pit home with us. Amy gave them a bath and then went to see the demo derby at the fair.

Step-Mother never called last night about the corn. Now I know why. She doesn't want it and doesn't even think it is any good! She wanted to know if I were the person who "snuck in and left the corn." But Jeanne told her how to add sugar to the water when she cooks it and it will be ok. I sigh. A lot. Never let a good deed go unpunished.

I sped home in a heavy rain because I thought I had left windows open. But I had closed them last night because it was so cold. So they were ok. I got these monster dogs outside on the hill and let them run a bit but the puppy wanted to go in and Scout was very agreeable to that! Then I went to the barn and there was Buddy just as I predicted. What a yowl he gave me! I carried him back to the house because he will not walk in the rain even if he has not eaten in 24 hours, which he hadn't.

Well, I found out why he was not home: porcupine quills in his face! Two short ones, that remind me of elephant tusks, stuck in two holes where whiskers should be. Amy said she will care for them when she gets home, no need to run to Dr. Judy. He is eating just fine. He doesn't even seem to notice them! I am wondering if he didn't run into a baby porcupine because these are short quills. I know nothing about these particulars but Amy will know or will find out tomorrow. If it were a baby though, wouldn't the mother attack him worse, hurting him more than he is now? Curious.

When Sophie Ate a Mouse 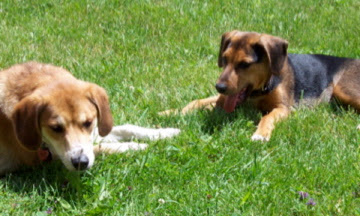 I have so many Vermont stories to tell that I should be writing them down. I will do so as I remember them, as if you are a stranger hearing them for the first time. It will be difficult to catch up but I will.

We came home to more dog activity. Buddy the cat had been grumpy and picking fights so Amy let him out. Within 15 minutes he caught a mouse for her, alive of course. But when he dropped it, the dogs scrambled for it, and Sophie swallowed it alive! Amy is pretty much disgusted by that and there were many jokes about the mouse in Sophie's tummy.

I made CDs of Bill Clinton's My Life for Andrew's birthday last night. The summer is over.

But the things to look forward to are the VAST courses and ..... well, at least one thing to look forward to. I am tense about teaching finite mathematics this semester, I am not ready. Tense about using Mathland text and having the fifth grade. Tense about money, about oil prices, about old bills I cannot seem to pay off in a timely manner.