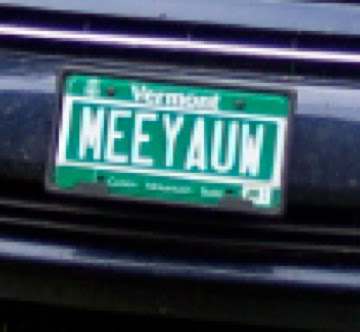 Last Friday, May 6, I had my snow tires taken off. They were in such bad shape they were illegal: they were worn past the tread and the "core" (I think that is the name) was showing. This core looks fibrous. Now I know why I had so many problems driving this winter and was skidding in water and even on gravel and dry pavement.

In November I remember that I called Dwayne at home at night and told him I didn't know if I could go to work the next day. I was clearly having a panic attack because I had slid down the hill near the veterinarian's office in Newport at a slight angle. He now tells everyone that he has never known anyone so afraid of winter driving. I remember the first year with those tires: I had caution and no fear. Next year will be like that. For another three hundred dollars I can be without fear.

In Hartford I never once worried about tires. No one cared if they were bald or bad. There were no hills. The commute was two miles. And school was cancelled for any reason at all. There were no white-outs, no roads with an inch of dry powder or an inch of icy slush. And if you did skid, you wouldn't fall into a ditch and flip over. You would only hit another car or a curb. You weren't going fast enough in city traffic to get hurt.

I bought those old tires in October, 2002. So that is three winters with them plus a part of one summer because I couldn't afford summer tires in May. From now on I will just use winter tires for two seasons. From November first to May first. That's the plan.