I woke up right at 5 AM just like usual. I had called Dwayne Tuesday night and told him I couldn't get to work because the car was in Coventry, so I didn't have to call in. I turned on the computer and played some games of Sudoku to wake up, had my vitamins, washed up with bottled water, and checked the thermometers. Dave had said that the pipes wouldn't freeze this week without power, but I still wanted to keep an eye on what temperatures I was living in. Still 62 upstairs; 58 downstairs. I plugged up the doorsill in the kitchen but I couldn't do anything about the window that wouldn't close without opening it and letting in more cold air. Dwayne called at 6:15, just as the plow came. There was no school so I wasn't missing a thing. The first October snow day in twenty years. I told him I would call him later that day about Thursday. It was still snowing heavily. I was too cold to go out and talk to Bernie, as I would usually do when I am home and he plows.

The cognitively-impaired cats had forgotten about the snowstorm so I let them out again. But I had forgotten that in the winter they tend to follow the plow: down the driveway out to the road. This keeps their legs dry. They hate walking in deep snow. They were busy, though, stalking some fat finches that were waiting out the storm in the garage. I was able to get them back in easily, and they never went out again until Thursday (for Charlie) and Friday (for Buddy).

We went back to bed, in the still-dark morning, intending to read, but immediately slept until 8 AM. I called Amy, waking her. They had lost power but it had come back about 1 AM. So they had been up very late caring for the boarded dogs and then went to bed.

I had my cornflakes (and became concerned about how warm the inside of my new refrigerator was), and continued reading my book. During the day it became lonely and even boring at times. I swept the floor, wrote out the November birthday cards, and wrapped Danielle's and Amy's birthday presents. I wrote Simonne a letter, which meant I didn't have to call her. Panic rose up several times but I used all my cognitive-behavioral training to keep it under control. I finished The Curious Incident book after lunch (ham sandwich and milk). About this time, the snow blew off of the power lines coming into the house. The crab apple tree is seriously damaged. The top has broken off and is dangling on the ground. All the trees in the woods are bent over double, touching the ground. It looks as if some hardwood is down in the woods, too.

I began Nickle and Dimed: On (Not) Getting By in America, another book I had gotten in Montpelier just a few days earlier when Camille and I had our outing. But I was feeling dirty by now, and colder. Upstairs was still 62, but downstairs had dropped to 56 and I felt it. When the sun began to set, which seemed to happen at 3pm in the gloom of the storm, I felt very cut off from the world. The loss of the use of the computer was the worst blow for me. That is my link to the world and my family. I called the village office and they didn't have good news for me: it could be the weekend before power was restored! Amy told me that 10,000 people were out of power around me. I didn't even know that 10,000 people lived in these three counties!

Dottie called, offering me warm food and a warming place, and a ride to my car. But I declined because I didn't want them out in the weather again. Also, I knew I still couldn't drive my car home on those roads with three year old summer tires. And I never wanted to abandon the cats. Matilda was now sneezing regularly and Possum was sneezing intermittently.

I decided to get the mail before dark. I never got it Tuesday, and I had seen Mary Lou dropping it off about 11 AM. So I put on my coat and boots and went out with the camera.
Click on the photos to seem them full size. 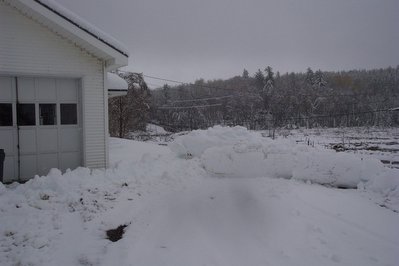 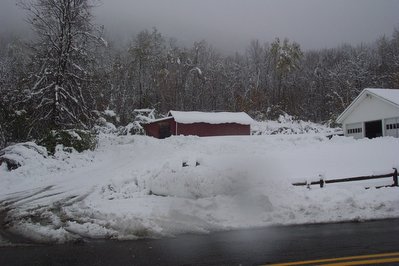 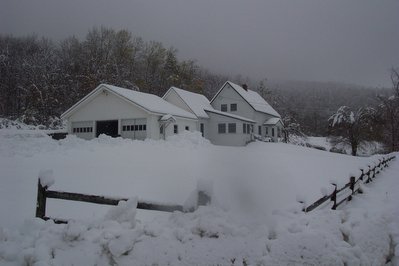 The panic episodes continued, more frequently, now. But I re-loaded my tea light candles and made supper before dark (tuna fish and canned pears and milk). I called the village again and they told me about the Red Cross shelter in the basement of the Memorial Building. There was still no hope of getting power until Thursday. Dwayne called that there would be a two hour delay on Thursday and I told him I still had no power, water, or heat so that I would be unable to go to work. To warm myself and help pass the time, I did some toe-touches and began to sing Christmas carols as I walked around the house. The singing upset Mouse quite a bit. She jumped after me around the house as I walked and meowed continuously, demanding that the noise stop. I finally gave up and did stop.

I continued to read by candlelight and flashlight until 9 PM, when I went to bed.