Friday and the White House 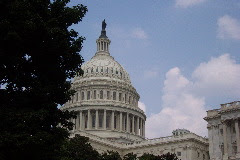 On Friday morning I got up early as I usually do. I spent an hour or more downstairs and outside with my Coke, cigarettes and new NCTM publication (it turns out that while Rosenstein at Rutgers told us all that it is not a back-to-basics manifesto it is a back-to-basics manifesto: I am to focus on division and fractions in my classes). I returned upstairs and took a shower.

We went to Whole Foods for breakfast. But breakfast was over, so we had lunch for breakfast and then set out for the White House. Our tour was at noon. We walked the whole way. Amy, of course, was speed walking ahead of me. But for some reason I was never far behind. I have no idea what her rush was.

On one street the police suddenly roared to life in front of us, stopping and diverting traffic. Suddenly we realized that the president was going to drive by and they were "securing" the area. We waited and there he was! Of course we could not see him inside his limo. There were several SUVs behind him, bristling with antennas for the Secret Service. It was very impressive. But Amy? She wanted to hold a protest right there I guess! Anyhow, we continued on and got to the White House in time for our tour. 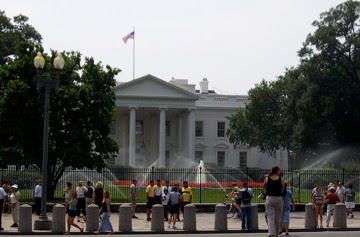 Our tours were arranged by the office of Bernie Sanders. As we walked down to the White House Amy told me the rules for the tour: no cameras, no bags, no nothing. I protested and decided that I was not going to go on such a thing. It turns out that I have my obstinate side when it comes to these things. I would wait outside while she toured. It was becoming so burdensome to tour our nation's first house! 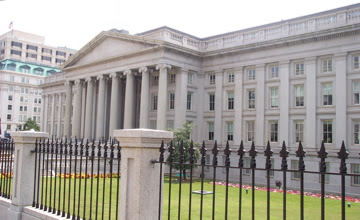 The Treasury Building
But finally we decided that I would go while Amy held my stuff and then she would go. I stood for a short while in a short line. The agent at the line had my name on a list, crossed me off, and I was allowed on the grounds. I went into another building for those metal detector machines and was allowed through there. And finally, suddenly, I was in the White House! My first visit!

Portraits hung everywhere. That is my impression of the White House. Tall ceilings, rich carpeting, way-too-serious Secret Service men standing like statues everywhere. We did have to stand in a queue for awhile. There were photos of previous presidents along the wall. But inside every group of photos was a photo of Bush. Andrew had warned me of this section.

A congressman came through the hallway we were lined up in. He was too animated and friendly. His sidekick assistant began, in this awful jocular manner, to announce to us who he was and where he was going! My mouth dropped in astonishment at this embarrassing show they put on.

We finally got to the touring part. We were self-directed. There were guides within each room to tell us things that I could not hear. The Pink Room, Blue Room, this room, that room. They all run together in my memory now. The most memorable thing for me was Kennedy's portrait of him standing alone during the Cuban Missile Crisis. Tears came up in my eyes. The memories of my past, of Kennedy's life, of the whole era, and of being here now made this time so special for me that it caused tears. 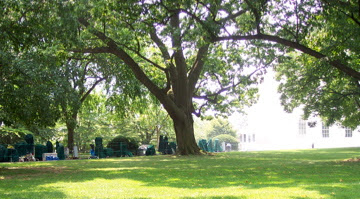 We left through the front door and walked down to Pennsylvania Avenue. Then I had to walk around the corner past the Treasury Building to where Amy was waiting. Now it was her turn to take the tour. But wait! The president was returning! So everybody out! We were all scooted out by more agents (how many are there anyhow?) and had to wait near this huge statue on the road. Finally we could return after all of those cars we had previously seen returned. Amy took her tour and I waited for her after I walked back to the front of the White House.
There was a big protest in front of the White House. We assumed it was against the war in Iraq but it was about another, older war: Vietnam. Vietnamese were protesting that they were losing their rights. They would come across the road, turn, and return to the park. They continued doing this all day despite the heat. 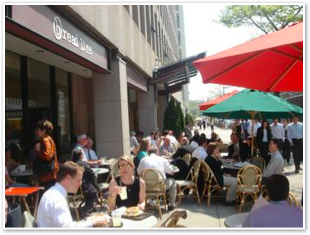 When Amy joined me, we walked to the Bread Line for lunch. What a great place. My favorite part was the water: chilled with mint leaves, lemon and lime. It was wonderful. The sandwiches were great too, but I was so dry because of the heat and walking that the water was the best thing. The wind had picked up and kept blowing over things as we ate outside. But I was with Amy and couldn't be happier.

I returned to the hotel to rest. Amy took off by herself (I think she went to Union Station for my camera). My walk back to the hotel was wonderful.

Later, I returned to Whole Foods for sandwiches and snacks. The kids did something else; I forget what. I played computer and watched TV and had a wonderful time. Oh I wish those times had lasted forever. 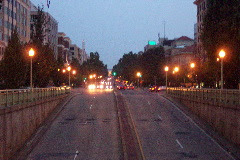