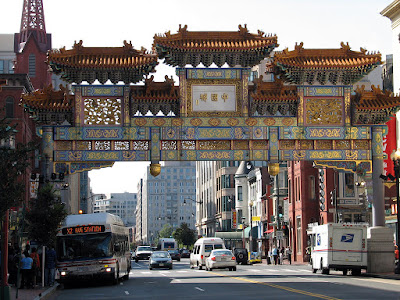 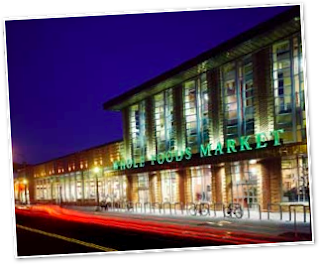 I was pretty hungry by the time Amy and Andrew wandered in Saturday morning so that we could go to Whole Foods for breakfast again (the photo with the purple sky above). It was colder and beautiful out. Hundreds of people rushed about and the food was great. We decided to go to the National Portrait Gallery and then see what else we could do. We planned on going out to eat that night. 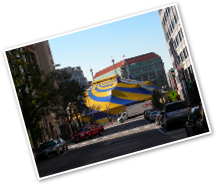 We began walking, just as we did yesterday: I still don’t know which streets or direction. But we went past the old convention center site where the Cirque de Soleil had set up their beautiful tents for their shows. Then we walked under the Chinatown arch and found the National Portrait Gallery (free admission).

I was very very hot so I viewed the Civil War area (where I was fascinated by John Brown and the submarine inventors and models) and then waited outside to rest and cool down. I soon left to get ice cream and cokes. Also some popcorn for the birds which were very used to people. It was fun watching them communicate to the others on the street that there was food. At one point I had attracted over eleven birds! Sparrows, pigeons, and another bird that I had seen all over the city and originally thought was a young starling. But having hundreds of birds the same age and markings meant they were not young starlings, but another type of bird. 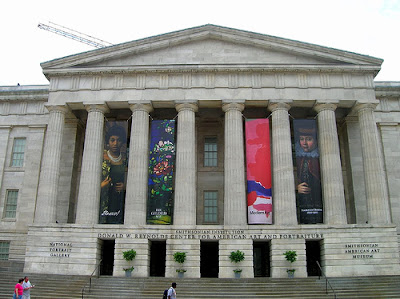 As we walked back to the hotel we went by Ford’s Theater. It was closed for tours because of an actual performance, so we went inside the house where he died (top left photo above). It was a very powerful experience to be in the same spot that Lincoln died. 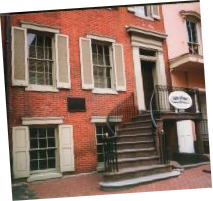 We continued to walk in the direction of the White House again and passed many architecturally wonderful buildings, including the Sun Building (Baltimore Sun) (the tall photo on the right). It was the first “skyscraper” in Washington.

I napped and rested for the upcoming long walk to Georgetown for Ethiopian food at Zed’s. Then I walked over to Whole Foods to get a strawberry cream cake that I had drooled over in the bakery. Eventually we started off down Vermont Avenue and past the Martin Luther statute again (a strange statute for a city to erect!). I wanted a photo of a Vermont Avenue sign and Andrew grudgingly took one on his phone and without even trying it came out unusable.

Photos of Hillary are in the entrance of Zed’s. The prices on the menus outside were very reasonable. We had a reasonable wait (no reservations) and had a great time learning how to eat with the sourdough steamed bread and no utensils. We shared a mishmash of different dishes between us, had some good conversation, paid the bill and walked all the way back to Dupont. The whole way! I certainly enjoy dining now: conversation, experimentation with food. No rushing in order to eat before my next class while I do many other things. Just talk and food.

I finally got into Andrew’s apartment (which, he had been saying, was disorganized and not ready for visitors). But it was great to see the work he had done and the electronic piano he has. He played for us (oh the memories there....): some Debussy, Chopin and Beethoven. Then we all walked to the hotel, had dessert very fast, the kids left, and I fell into bed dead tired.

For two whole days now, the kids have refused to walk with me but have been two blocks ahead of me. Very very irritating. I prefer Indian food, and while I am glad I experienced Ethiopian, I don’t like the bread and won’t seek it out again.