The Ride to Washington DC (Thursday) 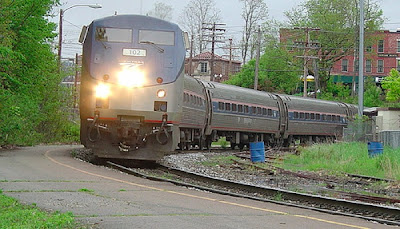 Now I know why business on Amtrak is disappearing. There is little separating them as a passenger train from a cattle car. We arrived in White River one hour before the train was to arrive. Amy argued with me about every single thing I was taking, especially the 2nd computer that I brought for her in case she wanted to play a game alone or play a networked game with me.

We all got our stuff to the train station and parked the car in the long term parking area. If you leave your car overnight, a man comes and tours the lot and leaves a bill on your car for the parking. When you return you have to figure out how much you owe them and mail it in. If you don't, and if you ever want to park overnight there again, they have kept track of your license plate and will tow you away.

The train was over an hour late. It was cool outside, but it was exciting. A whole four days together with the kids! I didn't even blink an eye at a twelve hour train ride. All of my previous (short) train rides had been fun. So this would be even more fun.

We sat backwards until Springfield. The scenery was great in most areas of Vermont. But the trip dragged on and on and on and on. There was a smoking stop in Springfield. Then in New Haven. It was not dark yet. I wish I had told Anna we were going to be there so that she could meet us. I still missed her nearly every single day.

The bathrooms on the train were just awful. Small and filthy. They were never cleaned the whole trip. The food was worse! The train was cramped. After 8 hours you begin to feel it. Amy had brought food but not enough for this length of time. I had made many assumptions: that the food on the train would be better, that there would be longer stops so that we could buy something somewhere. I assumed that Amtrak had actual train stations that served a purpose. But none of that happened.

The conductors changed occasionally. The last one we had wanted to set the world's land record to Washington so that we would not be late. How do you make up 90 minutes on a train? Somehow he managed to cut the time lost down to 30 minutes. He was reasonably good tempered but I still didn't like him. He was too familiar, and played favorites with too many people.

We finally got into Union Station about 11:30 PM. We got a cab to Andrew's building and he came down. Then we all walked to Rhode Island Avenue, with all our bags, to the Helix Hotel. Nothing about this reunion came about the way I visualized it. I had no time with Andrew, and Andrew seemed tense. He did not want us upstairs. All I wanted was to go to bed. Andrew and Amy walked way ahead of me as if I had cooties (that continued the whole weekend).

The Helix is a fun hotel. Clean, pretty, very fifties retro. The furniture in the rooms is flimsy but the bed was great. The TV was great. But you could barely turn around in the room because it was so small. My room was on the tenth floor overlooking the front of the building, with the patio area for the restaurant/bar directly underneath.

Once in the room, I could relax and be myself. The tension left me. This was going to be a great trip! I didn't get to bed until after 1 AM.

But I had left my camera on the train at Union Station. So all the photographs for these four days are from my 2003 airplane trip to Washington or are from flickr photos.