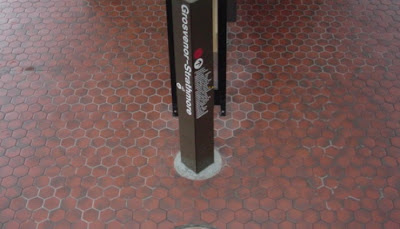 in order to use this article at school, I have copied it here..... photo by Mark Greenwald

Metro, the subway system serving Washington, D.C., has a distinctive look. Underground stations resemble immense, minimalist concrete bunkers. The tiles covering the floors are six-sided—large, terra cotta hexagons. Now, the board in charge of Metro is debating whether to switch to square tiles, like those typically found in most other subway systems around the world.

From a mathematical perspective, both square and hexagonal tiles do the job of tiling the plane. As do tiles of many, many other geometric shapes. And the choices get even wider when you consider using several different tile shapes together. My own bathroom, for example, is tiled with octagons and squares.

So, the decision on which shape of tiles to use actually hinges on practical considerations. One of the problems with the Metro hexagons is that they get slippery when wet. But that's a function not of their shape but of their composition and glazing. Still, the companies that manufacture safer square tiles apparently don't do hexagons. And lopping off corners to turn squares into hexagons would be extremely costly and wasteful, a representative of one tile manufacturer told the board.

Then there's the problem of broken tiles and water leakage. Metro officials claim that floors with square tiles would be easier to maintain than those with hexagonal tiles. Fewer sides mean fewer joints, and fewer joints mean less water leakage.

That's an interesting claim. The most efficient way of partitioning the plane into units of equal area with the smallest possible total perimeter is a hexagonal (or honeycomb) grid—not a square grid. So, to minimize the amount of grout required to fill the joints between the tiles, a hexagonal tiling would be more economical than a square tiling, provided the hexagonal and square tiles each have the same area.

However, if the issue really concerns the number of points at which grout joints meet, then a hexagonal tiling is at a disadvantage.

There's also the task of laying the tiles, especially when they need to cover large areas. One Metro board member who had tiled two bathrooms and a foyer in his own home argued that, as a practical matter, square tiles are much easier to handle and place than hexagonal tiles. Indeed, complex tiling patterns can be expensive and time-consuming to install. But are tilings or regular hexagons really more difficult to work with than are tilings of squares?
In the end, the Metro board put off the decision for another day.

To see the Metro tile recommendations, go to
http://content.wmata.com/board_gm/board_docs/101906_PlatformRehab2.pdf.. You can find an audio recording of the Metro Board Planning and Development Committee meeting on Oct. 19, 2006, at http://wmata.granicus.com/ViewPublisher.php?view_id=2.