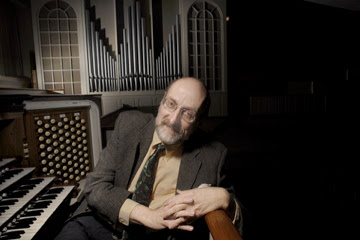 ONE OF DAVID SPICER’S favorite things is teaching children — as young as 5 — the “great biblical truths through music.” Spicer is the organist and choir director at The First Church of Christ in Wethersfield. Tonight, about 3,000 people are expected to attend one of the church’s four candlelit services. (TIA ANN CHAPMAN)

Many Respond To His Longtime Ministry

WETHERSFIELD -- For two decades, David Spicer has played sacred music at Sunday services at The First Church of Christ in Wethersfield, calling the faithful closer to the Lord in the largest Congregational church in New England.

While churches around the country are struggling to find replacements for organists reaching retirement age, The First Church of Christ's music ministry is thriving under Spicer's direction as minister of music and the arts.

Tonight, Spicer will lead the music as about 3,000 people are expected to show up at one of the church's four candlelit services.

"You can't find many people that are talented musicians and devout Christians - he's a combination of the two," said Bill Dean, a choir member who sat on a search committee that hired Spicer.

As the church organist and choir director, Spicer has directed everything from a 22-piece orchestra performing George Frideric Handel's "Messiah" to a small children's choir during his long and musical career.

Under Spicer, the church stages a concert series with year-round performances in contemporary, traditional and sacred music. The concerts are free and open to the public. There are Christmas and hand bell concerts, biblical music dramas and even a puppet ministry. Under Spicer's direction over the last decade, the church has hosted the annual Albert Schweitzer Organ Festival, a national competition for young organ students that provides scholarships to study the organ.

Spicer presides over an Austin pipe organ made in Hartford that also has non-winded, digital voices. He describes sacred music as "explosive and vibrant."

"Music is my life," said Spicer, who will turn 60 the day after Christmas. "I'm able to combine music and the Christian faith. Those are two powerful forces."

When Spicer was a child, his father prayed that he would grow to serve God - a prayer Spicer didn't know of until he was in his 30s. But by that time Spicer had begun a career in church music, graduating from the Curtis Institute of Music and Eastern Baptist Theological Seminary, both in Philadelphia.

Spicer moved to Wethersfield from Lincoln, Neb. Many of Spicer's seven children have sung in the choir. One of his favorite things about his job is teaching children - as young as 5 - the "great biblical truths through music."

"They sing songs from the Psalms and the Old and New testament. When you sing, it makes a deeper impression on the brain," Spicer said.

"The thing that makes him unique is that when you show up for choir rehearsal, you don't know if you are going to get a rehearsal, or a bible study, or a music appreciation class," Dean said.

Spicer's concert hall is the church's historic meetinghouse, where George Washington worshipped on May 20, 1781, while in Wethersfield to confer with the Count de Rochambeau, the commander of the French army in America, about the Battle of Yorktown, according to church historians. John Adams also worshipped there.

William Burke, whose two teenage sons are in the adult, youth and hand bell choirs, said Spicer is an inspiration.

"He has inspired several generations of youth to follow his path of celebrating great music in a church setting," Burke said.

Spicer said he'll remain at First Church as long as they want him.

"Reverend Schuller once said, `You bloom where you are planted.' As long as we are planted, we'll still make beautiful music," Spicer said.
Copyright 2006, Hartford Courant
Posted by Andree at 8:51 AM

Email ThisBlogThis!Share to TwitterShare to FacebookShare to Pinterest
Labels: Hartford