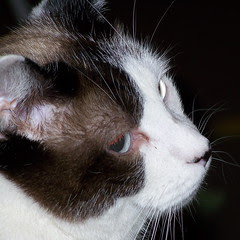 Buddy: taken Sunday, January 14, 2007
Buddy is winter weight here!
Buddy is half-Siamese. He's very unusually colored: brown and black splotches on top of white and cream. He has blue eyes. In the summer he is a lean hunter. In the winter he is a big soft blob.

I saw Buddy at the Frontier Animal Shelter. He was friendly and outgoing. He greeted every visitor: he knew he wanted to be adopted and hot to behave! He was adopted by an elderly woman who wanted a Siamese and "settled" for Buddy. My daughter Amelia and I helped them settle in together.

Within a week, however, things had gone bad. Amelia got a phone call saying Buddy had attacked the woman and he had to go. Amy and I drove over that night after work. The bruises on the thin skin of the old woman were horrifying. She looked as if she had been beaten! We packed Buddy up and moved him into our house. I put Buddy in the back bathroom where he would be safe from all the other animals and where he would feel safe. I could not imagine what had come over Buddy for him to attack that woman so severely, so I carefully observed him.

Buddy quickly settled down and I allowed him to be with the other cats within a week. We still had no problems. He was very deferential to the others and did not challenge their hierarchy or authority. But every day outside of the bathroom he became more tense. Before the second week was over, Buddy attacked me. It was hardly as severe as when he attacked that woman. I have experience with scared and violent animals, so I was not scared. But I was very concerned: there had been absolutely no provocation for the attack!

In frustration, I picked Buddy up and tossed him outside so I could calm down and clean my bites and scratches. After an hour or so, Amy came home from work and Buddy danced in with her: he was a new cat! He jumped up for kisses and neck scratches and rewarded us with mews and happiness. After a snack, he curled up for a nap. Now I was more confused than ever! What had triggered this cat's wild mood swings?

Twenty-four hours later, Buddy attacked me again; I tossed him outside again; he returned happy again. During his third week living with us (with his former owner calling daily to make sure that I had killed this dangerous cat!), we found that if he was allowed freedom to come and go outside as he needed, he was the best companion one could ask for. Restricting Buddy to the house literally drove him mad. Buddy wouldn't only attack me: he would viciously attack other cats and even the dogs.

Buddy is my joy now. After two years of total freedom, he has calmed down. He will go days now without attacking anyone. And the only time an attack happens is if I am not paying attention to his signals. The cats and I now recognize behaviors in Buddy that warn us of his attacks. At that point, I can toss him into the garage for an hour until he calms down. These tense times only happen in the winter. 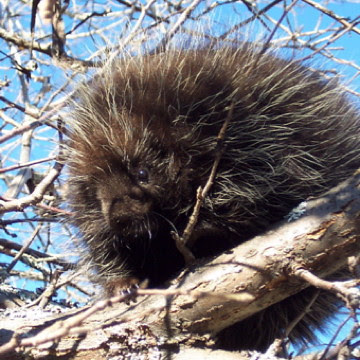 During the first two summers with me, Buddy would take off into the woods for one to three weeks. He doesn't do that any longer. He often would be sick from parasitic diseases or fights with other animals. Once he came home with three porcupine quills in his whiskers! He is older and slower now. 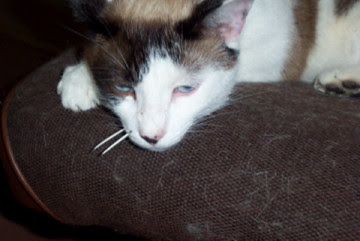 Buddy is a great bedtime cat. He will lie in your arms and stare at you adoringly while he purrs. His greatest joy is walking in the woods with you. He'll go anywhere, even to the point of exhaustion so that you have to carry him back. Hikes with Buddy are entertaining: he does not take the horizontal route. He runs up and down trees, crawls under logs, and leaps over blowdowns!

I am very fortunate to live where I live: it is very rural. Three of my cats go outside regularly now. They always go up back on Barton Mountain. They hunt mice, voles, and shrews (one day they sadly killed a beautiful star-nosed mole). Buddy is generous with his kills: he places them around my car in the garage. I make sure to never toss them out when he is around.

One November another daughter, Anna, came to visit me. A hundred or so years ago, Vermonters would bury trash in the woods. I had found such a spot on my property and I asked Anna help me excavate the antique bottles from it. While she worked Buddy ran up and down trees and helped her dig. But then Nathan drove up! Nathan was a local hunter who parks on my property and goes into my woods to hunt during deer season. Apparantly Buddy and Nathan had already met that season! Anna says that as soon as Buddy heard Nathan's truck, his head swung around and he raced off to meet his friend! As Anna watched, Buddy was walking by Nathan's side off into the woods! Later, Nathan confirmed that Buddy frequently hunts with him.

I often visualize Buddy and Nathan up in the deer tree waiting for a buck to walk by. What do they do? Play cards? Drink beer? Swap hunting tales?
Posted by Andree at 12:14 PM