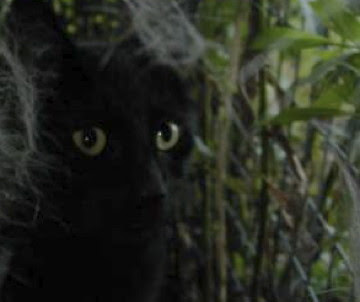 Zorro is my third cat that goes outside. He's fairly new at it though: I have only allowed him out for two summers now.

Zorro was born in August of the year the movie Zorro was released, hence his name. He has some white pinhairs on his chest but otherwise is totally black. He is the son of Matilda: a very special mother cat that died last year. I will tell you about her next week.

Zorro has a teeny tiny feminine voice which makes him the brunt of jokes of the family! Poor thing!

The first summer I lived in this house, Zorro escaped during the night. He had always been a very timid housecat that ran away from the door. But that night the cats knocked out the screen in the window and climbed over three roofs on my house and disappeared! I was horrified when I woke up. I live in the woods and had heard horror stories about cats being eaten by fox, coyotes, wolves, bears, and even hawks! So I spent the next few hours resceing them.

Zorro was the last cat that I "saved" from the wilds that day. While meowing pitifully from under the barn, he refused to come towards me and kept running away to do better things! Since that morning he has had an everlasting desire to be out with the wild cats. I finally began to allow it and I have had no regrets since. He has gained weight and muscle and is very self-assured now.