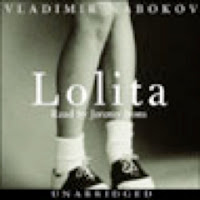 I don’t believe it. The folks who commented on this audible.com book seem to have missed the point! I know it is an excellent reading by Jeremy Irons: in fact the reading is the book! My point is that this book as read by Irons (and I probably would have missed it if I had read the text myself) gives us a look into the mind of a pedophile. And that mind is scary. Humbert's ego is so immense that he only knows any of humans as they relate to his comfort. Delores is not a person to him at all: she is a means to satisfy a huge drive within him that has prevente him from behaving human at all. He regards any woman older than Delores to be ugly and grotesque. This is misogyny. Even after spending a year with Delores, after raping this 12 year old daily, after telling her her mother had died but never allowing her a normal period of grief, after all this, Humber complains that she still has not bonded to him and continues to cry herself to sleep every night!

I may agree that this book is a classic of literature if I am able to learn if Nabakov was a pedophile himself (how did he ever learn about the psyche of pedophiles?). If he was, then this is not literature. It would then be a journal; non-fiction. I do hope to be able to spend some time investigating that.

But how these people can think that this book is about love mystifies me. You have to listen yourself and judge.

The following is from audible.com about Lolita:

What the Critics Say
"Lolita is an authentic work of art which compels our immediate response and serious reflection, a revealing and indispensable comedy of horrors." (San Francisco Chronicle)
"Language is essential to Lolita, and Mr. Irons captures Humbert's voice perfectly. In the Random House audiobook, he read the novel with a sensitivity to the language that conveys all of Nabokov's humor, passion, and lyricism." (The New York Times)

Publisher's Summary
When it was published in 1955, Lolita immediately became a cause celebre because of the freedom and sophistication with which it handled the unusual erotic predilections of its protagonist. But Vladimir Nabokov's wise, ironic, elegant masterpiece owes its stature as one of the 20th century's novels of record not to the controversy its material aroused but to its author's use of that material to tell a love story that is shocking in its beauty and tenderness.
Awe and exhilaration, along with heartbreak and mordant wit, abound in this account of the aging Humbert Humbert's obsessive, devouring, and doomed passion for the nymphet Dolores Haze. Lolita is also the story of a hypercivilized European colliding with the cheerful barbarism of postwar America. But most of all, it is a meditation on love — as outrage and hallucination, madness and transformation.

The Audible Review
Why You Should Download This Audiobook: Vladimir Nabokov's notorious tale of an aging intellectual's relentless and ultimately destructive fascination for a 12-year-old girl is one of the magnificent works of world literature. Jeremy Irons, who played Humbert Humbert in Adrian Lyne's screen version, delivers the text knowingly and with great insight. His mastery is so complete, his performance so convincing, that a greater experience of a work in audio—and there are many, many great experiences—would be difficult to find.

Reviewer: Amie, from Burbank, CA, USA Date: October 16, 2005 Reader captures all of the feeling and wit of Nabokov's writing. A wonderful book, and a great listen. Captivating all the way through.

Reviewer: Jim, from Bellingham, WA, USA Date: October 26, 2005 I have tried to read LOLITA on several occassions, but for whatever reason--probably the dull, midwest monotony of my internal reading voice--have put the book down. I purchased LOLITA (read by Jeremy Irons) with a sense of trepidation (had I just bought something I would never finish?) The book is as impressive as the critics will tell you. Nabokov's language, his ability to fully render a scene, his mind-boggling vocabularly, and his characters--those desperate and beautiful and horrible creatures--are like nothing else in the canon of fiction. Add to this the luxurious experience of Jeremy Irons' voice and you end up with a book--a reading--that will make you shake your head in awe.

Reviewer: compuhund, from Edmonds, WA, USA Date: November 08, 2005 Only Vlad can pull off such over-the-top vocabulary with such grace and beauty. Jeremy Irons gives as perfect a performance in reading this book as he gave in portraying Humbert in the recent film. While Lolita as a book may at first disturb those who have never before read it (or listened to it), those who have experienced the feeling of being in love with a person they can never really have will feel an instant sene of familiarity in Nabokov's moving narrative. The imagery is absolutely magical, evocative, and melancholy. A true work of art.

Reviewer: Victor, from Windham, CT, USA Date: January 26, 2006 This book builds slowly and subtlety from the diary of a 40-year old sophisticated, intelligent European man, who finds, isolates, and abuses a 12-year old American girl, to an emotionally intense, regretful, despairing self-criticism of his actions. I listened to this book twice, to completely understand the plot, the appearance of another older man, the second motor trip to the west, Lolita’s escape, the meeting two years later, when Lolita is 17, and the death of Humbert Humbert, Clare Quilte, and Dolores Schiller. Vladimir Nabokov’s prose is excruciatingly articulate – speaking of the world of total evil, being drunk on the impossible past, looking for the evidence of a supreme being in the darkness of his own sin, and H.H.’s thoughts, evoked by looking down on a town in the mountains where only the sound of children playing can be heard. The author’s own thought are difficult to discern and this makes reading Lolita a test of your own attitude about the plot. H.H., however, considers himself to be a monster who was cheated of his only chance at redemption when Clare Quilte helped Lolita escape from him. Only when the harm has been done, does he realize that he loves the child and even the dead-leaf echo of that nymphet at age 17.

Reviewer: myntmd, from Goodyear, AZ, USA Date: February 23, 2006 An engaging, beautiful scripted book. The reader sounds like a clasically trained actor and he speaks it as though he's thinking it up himself. The best audiobook yet!

Reviewer: Catherine, from Maplewood, NJ, USA Date: April 26, 2006 Jeremy Irons is one of my favorite actors, and he delivers a stunning reading of this classic. Nothing short of amazing - I can't imagine reading this book silently or hearing anybody else read it. The musical use of language is what makes this book, and it just rolls of Irons' tongue like honey. I didn't so much listen as observed this performance in amazement. Wonderful. If I could give more stars, I would.

Reviewer: Todd, from West Simsbury, CT, USA Date: June 06, 2006 I read (and listen to) a lot of different types of books and sometimes forget how talented some authors can be. (I’m not sure if that’s grammatically correct, but I’m not one of these great authors) Lolita is a book that makes you stop and realize just how beautiful the language can be. The narration adds to the experience. If you’re looking to go back to a classic for your next download, this will not disappoint.

Reviewer: Debra, from The Woodlands, TX, USA Date: June 22, 2006 There is really nothing to add to all the wonderful reviews that have been written about this story and it's masterful narration. It is well worth the time to listen. My heart broke a million times over for little Dolores and I was shocked by how much sympathy I felt for the monster Humbert Humbert by the end of the story. Jeremy Irons is a masterful narrator. I loved every second of it. Even when I wanted to choke HH.

Reviewer: Deborah, from New York, NY, USA Date: October 31, 2006 This was the best audible book I ever listened to. The narrator was the best. I enjoyed the story so much. I listened to it twice. Don't skip this one.
Posted by Andree at 2:38 PM