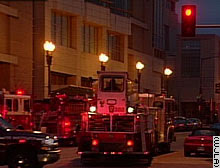 "At some point after leaving the Gallery Place Metro station ... the train seemed to slow down," said Amadi Boone, a passenger in the last car of the train.

"At some point, we started hearing some strange noises. The train felt very jerky. We started weaving back and forth, and then I felt a very violent impact."

The derailment occurred about 3:45 p.m. Sunday, acting Fire Chief Brian Lee told CNN. Some passengers were taken to hospitals after the accident, but it was not believed there were any major injuries, he said.

The cause of the crash was still under investigation, Lee said.

Another passenger, Keith McCoy, said the train hit a side wall of the tunnel, smashing in the front end of the lead car and knocking at least one door off the train.

Metro officials guided passengers off the train and out of the tunnel one by one, McCoy said. Some passengers remained aboard for up to 40 minutes, but there was no sense of panic among them, he said.

Andrew says he uses that station every day to go to work and that the feeling they described on the train is what he feels all the time. On Friday, in fact, he was wondering if that jumpy feeling on the track could make it derail.