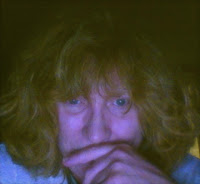 <-- That's me: but let's make it Ms. Grumpypants. I was called that by a student today after I chided him for having to pick up his paper airplanes one more time. I had a severe headache so I know I responded too harshly to the poor kid. He tossed himself into a chair and whispered to another student that I am Mrs. Grumpypants today. I cracked up when I heard him.

The photo was taken this autumn on Photo Booth with color effects (I forget which ones). I personally like how it emphasizes my eye color.

I got the rest of the 2003 recipes on the recipe blog today. I only had two responses to my Booking on Thursday meme. It is too cold, too dry. The cats are fighting because they can't stand being in the house anymore. It's going to be below zero all next week. I am in the depths of sadness again. I had huge technical difficulties in a lab class today that wrecked the whole effect I was trying to create for the students. I tossed away 5 gig of old podcasts I was saving for somebody special that never wanted to hear them anyhow.

But I found a lovely blog (blogaway: see the blogroll on the right) that linked me to a great song by Tom Chapin that was on NPR Morning Edition earlier in the month: just click TomChapin in my del.icio.us tag cloud (at this very moment it is not popping up in the cloud but it should appear shortly). The song is an NCLB lullaby called "Not On The Test". Cool.

But the throttle on the car still is not freezing. It isn't even threatening to freeze. I am bombing around on ice at 50 mph or higher. But I notice the brakes aren't too great at -15°. So I simply make sure that there is plenty of room between me and whoever is in front of me. Not that that happens too much.

Todos: blog about my father and Eli Maor; blog about my freezing throttle.
9:39 PM and -10° (I think it has warmed up a bit: perhaps the clouds that are coming in have trapped some heat).
Posted by Andree at 9:18 PM