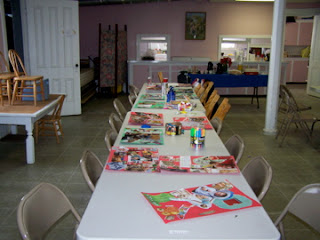 One of the large tables that we worked at in the church. The church kitchen is in the rear.
It was a wonderful day of peace and communion with 11 other women in the church basement today. We had a wonderful worship service with new and old hymns, a great story, and poetry. One poem struck a strong chord within me. Since my life has been a life of loss, this poem, which I will post tomorrow, helps me keep perspective and gives me comfort.

Then Jana, a Bosnian refugee, spoke to us about her experiences in Europe during the "ethnic cleansing" of Bosnia by Serbians. It was heart breaking. I can't give you all of the details because I don't have her voice. Torture and rape were the Serbians' favorite methods of subjugation. Jana's family survived intact and eventually settled in Burlington, VT after living in Turkey, Germany and other countries. After she spoke of her experiences, we had a long discussion on the abuse of Muslim-Americans in this country now. As soon as I find an Internet reference for you to read, I will post it so that you can have more information.

After a break we made individual collages of our life-long faith journey. Well, I had no idea how to do that, so I spent the hour and a half reading the magazines we were given to use and when I found something that pulled me, I clipped it out. I ended up with a nice collection of clippings that I pasted on my paper. 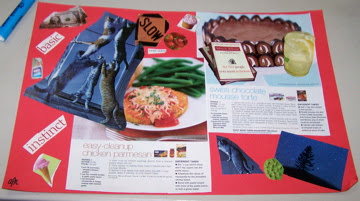 I began this project thinking it was silly. I ended the project understanding how our subconscious leads us to choose certain objects. After lunch, Pastor Evelyn then went around and interpreted all of our collages. Her interpretations of the images each of us selected was fascinating. It turns out that our faith journeys, whether conscious or not, are illustrated in our collages.

My collage has two recipes (my recipe blog), several cats, flies (symbolizing my first and second attempts at macro bug photography), a wad of dollar bills (my self-sufficiency), an ice cream cone and cupcake (self-explanatory!), a fir tree under the midnight stars (loneliness), a bottle of Clorox cleaner (I love that stuff), lemonade (my fantasy summers), an audiobook by Mitch Albom, strawberries (for my past summer with T which has broken my heart now), a SLOW sign to remind me to slow down, and 3 words of text: "basic", "inner voice", and "instinct": all concepts which have helped me throughout my life.

My collage has at least six triangles, which Evelyn felt was telling me to investigate the Trinity in more depth. I actually agreed with her interpretation because of my intense interest in that subject. A poem by Emily Dickinson has guided my belief that the Holy Spirit is a feminine spirit. I have tried to feminize God. I have tried to make God gender-neutral. These attempts have failed within me. But a feminine Holy Spirit is the proper way to think of Gaia and the Earth. I will post the Dickinson poem tomorrow, also.

We then used Play Dough to "sculpt". We let God guide our hands during personal prayer. I have no photos of these works: they were personal and very powerful. Mine was a spiral. I thought I wanted a Fibonacci spiral but I could not get the proportions correct. But Evelyn and other women said it looked exactly like a prayer spiral which we will be doing at another Women's Fellowship meeting in the future. They said it is a very powerful meditation device.

We then gifted our pottery to each other according to our hearts. There were so many tears of sadness and community then. It was very moving. I cannot go into the details because it was also very private and confidential.

We finished by writing small notes to members of the congregation that needed to have contact with the church. Then there were two different prayer circles. The last prayer circle was so powerful: it was a shared meal that was similar to communion. We used the candles from Christmas eve in order to pass blessings to each other before we parted. But when doing so, we invoked the name of a person that we have loved in that past that had died. We passed on the blessing that the deceased person had given us and gave the blessing to our neighbor. There were many, many more tears of sadness then.

My wish is that every woman everywhere can experience a day of peace and profound communion like this. I am successfully re-claiming my spiritual life which I lost somewhere this past year.
Posted by Andree at 10:41 PM