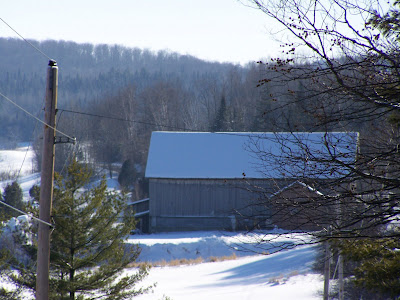 Any boy can find an electric fence here in the Kingdom.
T, our classroom para, does morning meetings in my homeroom because he knows what he is doing in morning meetings. Today was Book Thursday. We go around the circle talking about books we are reading. But T's discussion stopped the show: peeing on electric fences. He described how to do this, as written in the book he was reading: Harris and Me by Gary Paulsen. All six of the boys' eyes lit up. What a great idea! As I envisioned all six of my male charges electrocuted in the snow, I spoke up: "Well, I don't know how exciting that would be. After all, when my father had an electric fence for the cows, he hooked it up to an old car battery. That can't be too dangerous."

But B, 10 years old like all the boys, interrupted. "Oh no no, it's bad! It hurts!" So obviously we had some personal experience here. The other boys' faces lit up even more. They all exchanged wide eyed glances. I tried again and asked T, "What happened to Paulsen? How badly injured was he?" T, father of two boys, watching the reactions of the boys, was laughing so hard he barely heard me. But he described how the boys in the book were hurt. They could not walk normally for a week. "Oh man, that's so cool," was whispered in awe all around the circle.

No, not all around the circle. The three 10 year old girls, sitting near me, all of us females together, were looking at me, slowly shaking their heads, rolling their eyes. They all have brothers. They seemed to be saying there was nothing I could do to stop this conversation. It was difficult for them to suffer this male silliness but they were patient. I whispered to them, "Why do they do this?" They all three silently raised their eyebrows. Who can understand the boys? Who wants to?

I asked the boys, "Why do you do this?" Then they all began roaring with laughter, doubled over. They began to impersonate John Wayne of all people! Who would think that in 2007 ten-year-old boys would even know who John Wayne is? You could tell that they couldn't wait to get out of school today and try this thing out.

I thought I would end the conversation and said, "OK. If any of you come to school walking funny, I'll know what you did." That sent them out of control as they began to walk like cowboys, imitating John Wayne, roaring with laughter. Only ten-year-old boys have a laugh that can both scare you and fill your heart with joy.