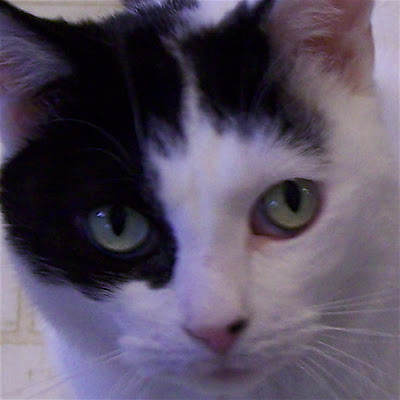 Say Hi to Turnip! He is Zorro's full brother but Turnip was the first born of the litter. Why Turnip? Because Amy always wanted a cat named Turnip, so now we do!

He looks so sweet and he is. He has a cute way of turning his head nearly upside down when he wants attention. He sleeps in the crook of my arm all night long. He is shy and reticent and doesn't make new human friends easily.

But Turnip is a killer. He's the indoor killer in the family.

I was getting ready for weekend guests one day and I needed to prepare the spare room. It was summer so I was barefoot. I walked into the room with an armful of pillows and fresh sheets. I stepped on something wet. I groaned. We all deal with cat yak, right? I was sure this was some more for me to clean up. Putting the sheets down, I looked at what I had stepped in. It wasn't cat yak. It was long, red, and wet. I couldn't figure it out. I found a cleaning rag and poked it a bit trying to comprehend what this was. Oh my God! It was a skinned snake! Turnip had not only killed a snake (he finds them in the cellar) but had skinned it! There was a bit of snake skin on its head. But no where else. And I had stepped on it!

Turnip was on the bed, awakened by the noises I had made. I looked at him in shock. "You did this!" I gasped. "How could you?" He smiled at me with pride, stretched and went back to sleep.

It took a long, long time until I felt I had sterilized my foot enough. I rested then, devising a plan to dispose of this snake and not vomit myself. I double-bagged two plastic grocery bags and got my kitchen tongs. Wearing a pair of Amy's surgical gloves, I walked as close to the snake as possible without looking, reached with the tongs, grabbed the snake (cringing at the squishy feel of it) and dropped it, tongs and all, into the bags. I tied up the bags securely and ran into the garage and dumped it into a trash barrel. I then disposed of the surgical gloves just like a surgeon would. Then I took a long, long time to disinfect my hands and took a shower.

Beware of a sweet faced cat. There is a cruel killer behind those pretty eyes! 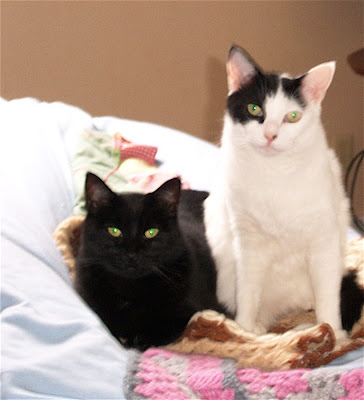