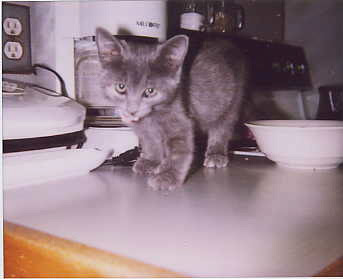 Like all my cats, Pansy was rescued. Truly rescued. I was working in Hartford, CT in the innercity when one morning a student told me that he had rescued a kitten from his garage roof. He said that some students had tossed the kitten up there and had been throwing rocks at it. He climbed up and got the cat down and put it in the house. But his mother wouldn't let him keep it. He was worried because he was sure that the kitten's leg was broken. In fact, he had taped half of a Popsicle stick on the kitten's little leg to set it!

Jose and I left school and went to his house to pick up the cat. She was a funny looking cat and her leg looked wrong. We drove directly to my vet for her blood tests and exam. I got a call later that afternoon: Pansy was fine! No awful diseases, and no broken bones. But she did have many birth defects. So I took Pansy home where she has been family ever since. 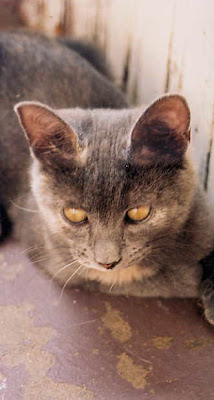 Besides bent legs, Pansy has the wrong numbered toes on each foot. Where cats will have four toes on the front and five on the back, Pansy has 4 toes in back on one, 6 toes on another, and 5 on each front foot. The vet and I were reluctant to spay Pansy because, the vet said, the rule of thumb for birth defects is "1 on the outside and 3 on the inside." But we took special precautions and she had no problems.

Adult Pansy with pals.
Pansy does not socialize with humans: only cats. She is cared for by them. They know it is difficult for her to get around and they watch over her. Nobody ever picks on her, not even those nasty boys Buddy and Charlie. She sleeps, eats, and plays with anybody she chooses. Her favorite of the bunch for some reason, is Buddy, She is never part of any hierarchical or territorial dispute. Just goes to show that cats take care of their special citizens!

Thank you for stopping by! I hope spring is beginning where you live. Have a great week!