Wells River, VT
From 1870 to 1915, a period covering 45 years, an event captured the attention of people living in the Connecticut River Valley — log drives. So many logs floated downriver it appeared as if the waters had disappeared under a blanket of wood, packed solid from bank to bank.

One Newbury resident, Kate Meader, recalled the head of one drive as it approached the town. She wrote of seeing the first boat preceding the advance of logs. "Its solitary occupant stood high in the narrow pointed prow with one foot on the gunwale, and a long blue oar lightly poised paddlewise over his knee. We wondered whether he knew how much like a Viking of old he looked in bold relief against the evening sky, or, as he came nearer, what a charming bit of color his red shirt and blue oar made in contrast to the dusky green of the willows on the opposite bank."


Why the need for log drives? To fill the hungry demand of sawmills to produce dimensional lumber to construct buildings in southern New England. The combination of logging operations and agriculture had stripped the harvestable timber from the region. Mills required a new wood source and they discovered it in northern Vermont and New Hampshire — thousands of acres of virgin spruce forest just waiting to feel the cut of an ax or bite of a saw.

Before any drive commenced, you needed the wood.

Every fall, lumberjacks gathered in the northern forests' logging camps. Each day, the men set out into the woods carrying their axes and saws to fell the large trees, limbed them and cut them to length. Teams of horses then skidded them over the snow to nearby waterways where they would be stacked in large piles. The workers toiled for long hours in bitter weather and devoured voluminous quantities of food. And the stacks of wood grew higher and broader with each passing day.

Finally, as the ice started to break up, crews made preparations for the next step — the river drive. Logs would float 250 to 300 miles depending on what mill received the timber.

One did not just release the huge piles in one giant rush; river bosses orchestrated the process. Dams discharged sufficient water to propel logs downstream over ledges and around curves to reach the Connecticut River.

From those tributaries, an estimated 200,000 logs floated annually down river to those hungry mills. Depending on water flow, it sometimes took days for a drive to pass by one point.

Rivermen were a special sort. Charles Cummings described them in an article for the Vermonter magazine: "They are picked men, cool, sturdy and big-hearted." He also wrote that logging "is perhaps the most dangerous of occupations, yet they brave danger daily, with supreme indifference."

How many employers would ask a man to "dash across stream by running from log to log ... single out the vital point in a jam and concentrate there in force … stand far out on the apex of dams where big sticks of spruce rear and swing and plunge" and "push their big boats through the tightest places, and steer them over falls and rapids."

The men worked 15-hour days for good pay, but every year 10 to 12 men perished as one bad step could mean death. Rivermen became victims of drowning, being crushed by 40-foot logs upwards to 2 feet in diameter or pitched off logs while passing through rough waters. An old riverman tradition existed if a victim's body was recovered; fellow workers suspended his boots from a tree along the shore.

Jams proved the greatest problem on the drive. Just a single obstructed log could block the flow of thousands and back up the river's waters. Here the drivers earned their wages. They scrambled out to the blockage with their spiked boots in an attempt to free the "key" log in the jam. One needed to possess quick reflexes, for if that trapped log released, the rest of the jam could suddenly follow, putting the drivers at risk.

River bosses resorted to dynamite if a jam proved too insurmountable for humans.

Logs swept through the deadly 15-Mile Rapids — now covered by the waters of Comerford and Moore Reservoirs — over the wooden dam at Wilder, through Hartland's Sumner Falls, squeezed into the gorge of Bellows Falls, around the bridge piers at Windsor and southwards into Massachusetts.

Some of the hardest work occurred towards the end of the drive, a process known as "cleaning up the river." After the majority of the logs floated by, crews came by to gather up the timbers stranded along the shore or hung up on rocks and other obstacles. Men used their peaveys and pike poles to send the logs down river. When brute force proved insufficient, rivermen unloaded teams of harnessed horses from rafts, attached chains to the unyielding logs and pulled them free. The men continued downstream spending hours splashing through the cold waters.

Bringing up the rear of the drive was the venerable cookhouse, a sturdy shack built atop a raft. Called the Mary Anne, its cooks turned out large meals to feed the hungry drivers. Children watching from shore knew those cooks, grizzled men and a force to be reckoned with, had soft hearts. Quite often tasty doughnuts would reach small hands along the route. One 10-year-old penned in his diary for June 1, 1904, "The cook gave us the biggest cookies you ever saw."

Onlookers realized when they spotted the Mary Anne, the end of another log drive had drawn to a close until the following spring when thousands of logs would once again float by in the current with agile rivermen confidently dancing from log to log.

Such an annual event had to eventually end. The heavy pressure of logging the Vermont and New Hampshire forests denuded the slopes. The one-time vast timbered acreage had been depleted and operating costs had risen. The lumber companies decided 1915 would be the final drive on the Connecticut River. 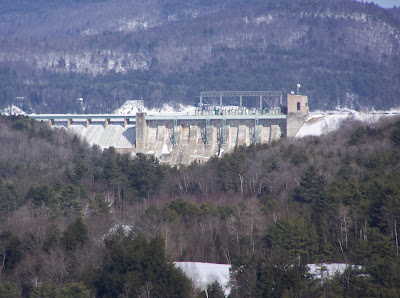 When word circulated regarding the last drive, the young, the old, the retired, rushed to join in this piece of history. The drive was to be the biggest on record, no little hurrah for the Connecticut River.

More than 2,000 men labored in the woods during the winter and more than 500 hired on for the drive. By the time all stacked logs flowed into the Connecticut, it represented 65 million feet of logs. Such a quantity took the Massachusetts mills two years to saw.

Robert Pike summarized the great event as he recalled a scene from the last log drive that he observed from a bridge near 15-Miles Falls upstream of Barnet. In the style of a eulogy he wrote, "A solitary riverman came in the red beams of the dying sun. His peavey point was stuck into the big log on which he rode, and both his hands were clasped around the top of the heavy handle. Seemingly oblivious to the slippery, unstable quality of his steed, poised in a splendid attitude of indifference to the many acquiring eyes he knew were fixed upon him, he came whirling down the river, the 20-foot spruce surging and lunging through the white water … His sweaty suspenders were crossed over a red woolen shirt; his heavy black trousers were staged off about the tops of his spiked boots. A torn, gray felt hat, its tattered brim turned up in front, revealed his eyes, watchful as any cat's, and by the look in his eyes and by the little bend in his knees we knew that while he appeared so nonchalant as he leaned there upon his peavey-handle, he was intensely alert. … So he went on … and disappeared in the fading light."

The Connecticut River log drives, the longest in the United States, ended and became a part of the past, just like the stalwart riverman who floated downstream in Pike's remembrances.