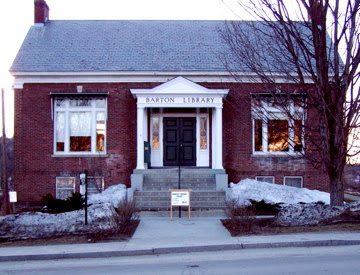 The Barton Public Library is a beautiful, peaceful and friendly place. It is not owned by the town but by public subscription. That is new to me. Dues are only $5 a year (but you are never asked to subscribe in order to use the library!).

My favorite times there are Movie Night. It began a few years ago when Jim ran his collection of old silent movies on one Saturday night a month. It was mostly Harold Lloyd and Abbot & Costello. I quickly learned to cherish these nights. Amy even went a few times and had fun! Jim and his son would provide popcorn and soda and I began to bring brownies.

Jim ran out of old movies after a year or so. Now the library plays all types of movies . . . legally. They have permission to play them to the public as long as they don't advertise the titles. Many libraries in the Kingdom do this. So on the last Friday of the month at 7 PM I am going to the movies again! Five people attended Friday night.

The library recently got a DVD projection system and now you can see better than ever (and for me, hear better than ever)! Once a month they also run a youth movie. More people attend that one. All the movies are free to the public.

Historical Marker in front of the library: 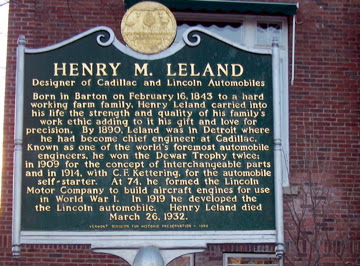 Born in Barton on February 16, 1843 to a hard working farm family, Henry Leland carried into his life the strength and quality of his family's work ethic adding to it his gift and love for precision. By 1890, Leland was in Detroit where he had become chief engineer at Cadillac. Known as one of the world�s foremost automobile engineers, he won the Dewar Trophy twice: 1909 for the concept of interchangeable parts; in 1914, with C.F. Kettering, for the automobile self-starter. At 74, he formed the Lincoln Motor Company to build aircraft engines for use in World War I. In 1919 he developed the Lincoln automobile. Henry Leland died March 26, 1932.