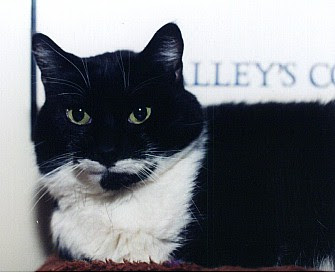 Frankie was my favorite cat ever. He was so mean that my daughter Amy (my resident vet technician) refused to pill him if needed or give him his shots. The vet even refused to care for him unless he was drugged! He lived in my bedroom except for food, water and litter box. When he left my room all the other animals hid. He attacked any dog or male cat that was within sight. He left the female cats alone and tolerated them in bed at night. But Frankie loved me. I could pill him, pet him, cuddle with him and even play with him. He slept in my arms under the covers every single night for fifteen years. Yes, he bit me a few times, but he had been an orphan. So he was going to be confused at times.

One night, Amy and her dog, Daisy, were asleep in my bed with me and Frankie. Frankie woke up and saw the dog (a 90 pound (40.8 kg) dog no less!) lying across his bed. His eyes narrowed. I was in a mood so I gently shoved Frankie towards the dog. Frankie got the message! He slowly slithered toward the dog. Poor innocent Daisy. She had actually nursed some of our orphaned kittens and here I was setting her up for a sneak attack!

When Frankie got close enough to Daisy, he flew in the air and landed on Daisy hissing and growling. Poor Daisy fell off of the bed in terror. All of the racket woke up Amy and in her fright, she fell off the bed too! Amy and Daisy sputtered nasty curses at me and Frankie. Frankie, his tail high, walked back to me and curled up in my arms and fell right back asleep. 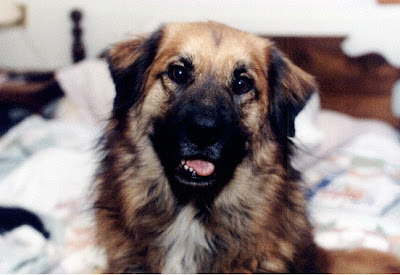 Sweet Daisy sitting on the same bed.
I still chuckle when I think of the prank that I played on Daisy and Amy. Amy still gets mad. Both Frankie and Daisy are gone now. But they will never be forgotten. They were the best.
_/\_/\_
Posted by Andree at 10:25 PM