Signs of Spring, Signs of Winter, and MSIE Blues 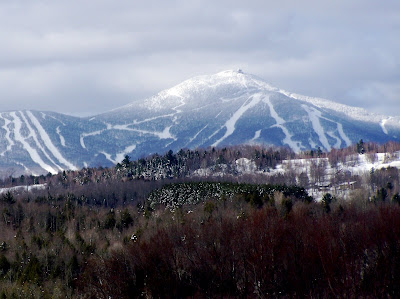 Jay Peak on April 10, 2007 as seen from Rt. 105, North Troy, VT
I had my own personal sign of spring today: Buddy's first kill. He went out in the dark at 5AM this morning, as usual. It was snowing (of course) and cold. Two hours later when I drove the car out of the garage, a cloud of beautiful downy feathers flew around outside the car. I stopped and looked: bird parts were all over the roof of the car. So despite the weather, Buddy was able to kill. No wonder he was exceptionally happy coming in this morning.

Sights on my drive this morning: a flock of turkeys that flew away as I came near. Flew! And rather high, too, and for quite a distance. I've seen them awkwardly flutter short distances before, but never fly like this. There was no chance for me to photograph them. Then there were three deer following a trail in the woods (again, no photo), and a small group of Canadian geese paddling in a Missisquoi-flooded field. (Update: they may not be geese afterall).

Microsoft Internet Explorer, any version, does not display my blog properly. The right hand column shows up on the bottom of the left hand column. If anybody knows how (or if) I can remedy this, please let me know. Why can't Microsoft be like Safari and Firefox?

Most disappointing: we are on another winter storm watch for Thursday. There were rumors all day in school about it with people disputing it and expressing dismay. It is possible that we will get another six inches of snow. This is depressing me. Spring vacation is next week and it's looking more like December and February vacations with over one foot of snow on the ground everywhere.