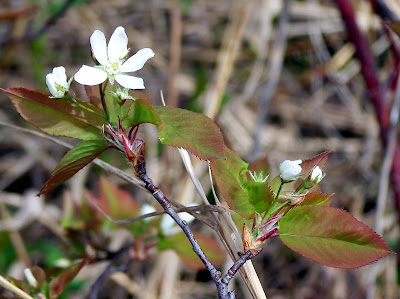 A blossoming tree in the Victory Bog, Victory, Vermont
I hope you all had a pleasant Mother's Day. When we went to church this morning I read the bulletin cover as I always do and was impressed by the meaningful message for today. I decided to type it out in full so that I could remember the original meaning of Mother's Day. This article was written by Sara Webb Phillips on a bulletin cover that seems to be from the UMC. I have searched for over an hour but can't find a thing on the Internet.

In some churches Mother's Day is one of the big three religious holidays, as in Christmas, Easter, and Mother's Day, the closest thing Protestants have to a holy day of obligation. After all, we know that a mother's role is to deliver children – obstetrically once and by car forever after! Young children may honor mothers by serving them breakfast; adult children may return home to worship with their mothers. For some, however, Mother's day can be difficult because their mothers are dead. Others might remember mothers who weren't all that nice or who struggled with motherhood. Yet, the best intention of this cultural remembrance is for mothers to sit back for a change and be receivers instead of givers.

But it wasn't always so. Mother's Day was originally envisioned in the 1870s, not as a day of flowers and presents, but as a day for mothers to make their voices heard. Julia Ward Howe, the author of the "Battle Hymn of the Republic," was a mother in the days before women were allowed to vote. She asked, "Why don't the mothers of humankind interfere in these matters [of war], to prevent the waste of that human life of which they alone bear and know the cost?" thus encouraging a mother's day of working to eradicate war. It was not a day of rest for mothers, but a day of action for the cause of peace!

In today's Acts reading (see below), we remember the story of Lydia, with the genuineness of her conversion reflected in her hospitality. Her home had become a house-church, providing a new freedom for people of mixed classes, cultures, different gender and race. In her actions, she reflected Jesus' words from John's Gospel: "Those who love me will keep my word."

Today, in this season of Easter, we honor women who have nurtured us and lived out gracious hospitality.. May such action continue to stir us to faith lived out in love.

I have chosen The Message version of the text because it sounds so much like life today, making the reading meaningful to me: Lydia could be any of us.
Acts 16: 9-15

That night Paul had a dream: A Macedonian stood on the far shore and called across the sea, "Come over to Macedonia and help us!" The dream gave Paul his map. We went to work at once getting things ready to cross over to Macedonia. All the pieces had come together. We knew now for sure that God had called us to preach the good news to the Europeans.

Putting out from the harbor at Troas, we made a straight run for Samothrace. The next day we tied up at New City and walked from there to Philippi, the main city in that part of Macedonia and, even more importantly, a Roman colony. We lingered there several days.

On the Sabbath, we left the city and went down along the river where we had heard there was to be a prayer meeting. We took our place with the women who had gathered there and talked with them. One woman, Lydia, was from Thyatira and a dealer in expensive textiles, known to be a God-fearing woman. As she listened with intensity to what was being said, the Master gave her a trusting heart—and she believed!

After she was baptized, along with everyone in her household, she said in a surge of hospitality, "If you're confident that I'm in this with you and believe in the Master truly, come home with me and be my guests." We hesitated, but she wouldn't take no for an answer.