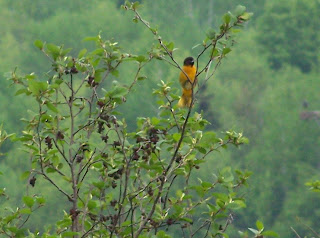 I left this morning at 6:30 AM to go birding with folks from the Northeast Kingdom Audobon Society for the annual Birdathon. The others knew the sounds of all the birds and could tell even by their flight what they were looking at. I wandered around happy as a clam photographing anything I liked. We followed the Barton River in Coventry on the River Road (the Coventry Marshes).

At one point I left the group entirely and followed the railroad tracks. That is where I managed to catch the photo above of a Baltimore Oriole. I only had one shot and it came out rather well for having only a second or two to focus. I was going to e-mail the photo to the group but after I saw the bird photos of one member, I decided not to. After all the walking I decided to sit and rest in the car while they continued to "bird." I shot the photo below of the group from the car. 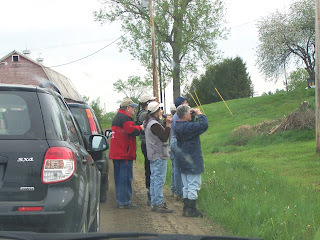 Suddenly the rest were excitedly motioning me to leave the car and join them. They had found another oriole and were watching her build her nest. The clouds had thickened and the available light was very poor for my camera. But somehow I got this very poor shot of her weaving her nest: 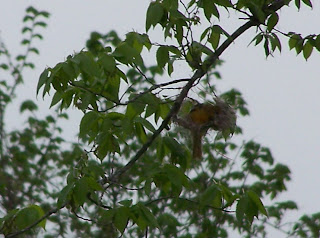 The oriole flew away and I was able to get many photos of the nest-in-progress with different magnifications. I have posted only one here but the rest are in a Flickr set I made today. 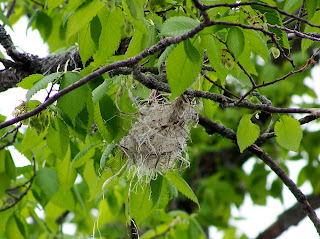 I left the group and returned home at 9 AM because I was soaked from lying in wet grass to photograph wild flowers. I will post the wildflowers later today or tomorrow. I changed, went to church, and now will read and rest the rest of the day.

This has been another wonderful day.
I absolutely need a Canon Rebel XTi.