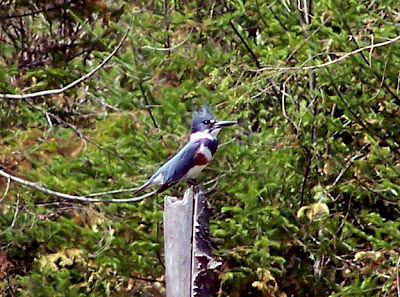 I went to the Victory Bog yesterday to go bird watching. This was my first bird watching adventure and it was great. I only photographed three different birds, and I missed a good shot of a saw-whet owl, but I am proud of these. Now can I get a Canon Rebel?

All photos of the day can be seen on my Victory Bog flickr set.
Yellow-Rumped (Myrtle) Warbler 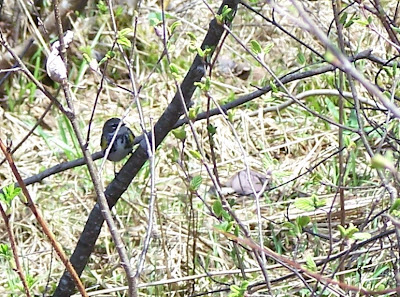 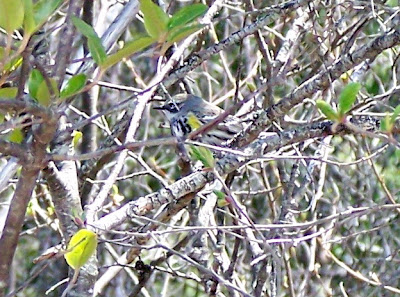 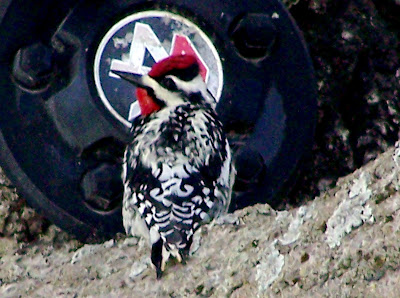 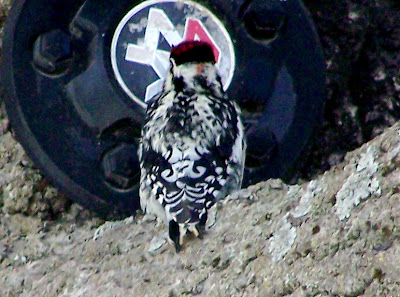 Victory Basin Wildlife Management Area (WMA) is a 4,970 acre wetland and forest complex owned by the State of Vermont and managed by the Vermont Fish & Wildlife Department. the property is located 15 miles northeast of St. Johnsbury in the town of Victory, in Essex County. Access areas are located along Victory Road, a dirt road that bisects the WMA and follows the Moose River from North Concord to Gallup Mills.

Prior to State acquisition, the basin was the focus of important logging and lumbering activity that spanned the period from 1810 to 1948. Early attempts to farm the basin's shallow, rocky soil following lumbering soon failed and the area reverted to forest.

Victory Basin WMA was acquired from the New England Power Company in 1969, ending a long debate over the U.S. Army Corps of Engineers' plan to construct a dam on the Moose River. The dam would have flooded the entire basin, and was strongly opposed by State and local conservation groups who were concerned about the loss of such a large deer wintering area and unique wetland complex. The purchase was funded by a combination of Pittman-Robertson monies (generated by a tax on firearms and ammunition) and State funds generated from the sale of hunting licenses.This WMA hosts a variety of habitat types, all within close proximity to each other. Within the heart of Victory Basin lies a 20-acre, broad-leaved, evergreen scrub-shrub community classified as a "boreal bog". Small stands of black spruce are scattered across the lowest elevations, growing on lush sphagnum moss beds. Extensive stands of red spruce and balsam fir surround those wetland sites on slightly higher elevations, providing critical wintering habitat for white-tailed deer.
The Moose River's meandering floodplain is dotted by older swales, black cherry "islands" and sedge meadows. The hills surrounding the basin are dominated by yellow birch–American beech–sugar maple forest typical of the region.

Mammals: White-tailed deer numbers increase dramatically during the winter. The vast acreage of spruce-fir forest is managed to afford wintering deer greater mobility and access to winter food.
Active and inactive beaver lodges create valuable wetland habitat for a variety of wildlife including muskrat, mink, otter and raccoon. After hibernating, hungry black beer relish early spring foods available in the wetlands. Moose are common, as the diverse wetlands and uplands are ideal habitat for them.
Snowshoe hare are abundant in and around young stands of spruce-fir forest. Red fox, weasel, bobcat, fisher and coyote also inhabit Victory Basin.

Birds: Beaver ponds provide feeding grounds for great blue heron and bitterns, and nesting habitat for wood, black and mallard ducks, and hooded and common mergansers.
Woodcock feed in the alder swales and breed in old fields and openings along the Moose River. Forest management activities compliment the natural ruffed grouse habitat on the flood plain.
Great habitat diversity provides excellent opportunities for bird watching, with over 130 species sighted in the Basin. The gray jay, olive-sided flycatcher, Cape May warbler, black-backed woodpecker, rusty blackbird and white-winged crossbill are boreal forest species observed in the WMA that are not commonly found in other parts of Vermont.

Reptiles and Amphibians: The tremendous variety of uplands and wetlands may provide habitat for many species including norther spring, red-backed and spotted salamanders and eastern newts. Snapping and painted turtled may be found near open water. Ring-necked and red-bellied snakes may be found. Frog species may include mink, green, pickerel, wood, leopard, gray tree and bull frogs, spring peeper and American toad.

Fish: The section of the Moose River upstream of Rogers Brook provides the best habitat for brook trout.