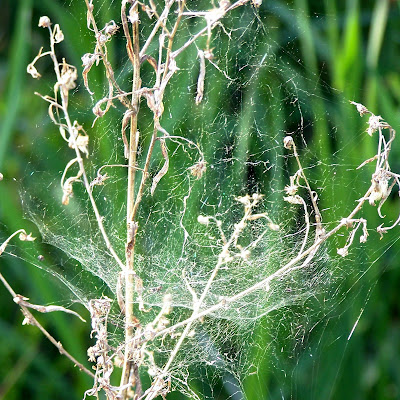 Spider web on a weed at the Reservoir
I finally finished Marie Blythe by Howard Frank Mosher. It haunts me. She is a strong character that I doubt will ever leave me. Mosher did well, missing only a few beats, writing a woman's point of view. Mosher told me a year ago that Marie was based on a real woman who lives (or lived) in Brownington. He is having another book signing on June 27, in Hardwick again, but I have class so cannot go.

I took many photos today. I even got recognizable photos of the blue flags that are blooming in the beaver meadows. But this photo is the one I have posted because of the web. It was like a bowl inside the dried branches of the weed. Click on it to see it full size.