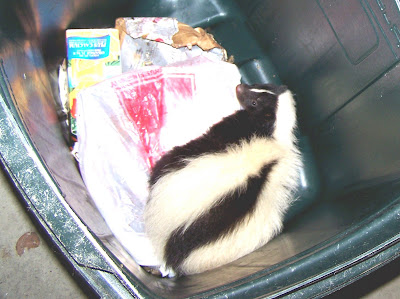 Friday, the last day of school for students, was half a day. I was home at 1 PM and was to pack for my weekend in Rutland. But first I had to clean up some cat yak, which I tossed in a grocery bag with some other very heavy trash. I opened the side house door to the garage and tossed it into the conveniently open trash can without even leaving the house.

Soon, while packing, I noticed an intermittent skunk smell. It was faint so I figured the cats and skunk had had a tiff out in the barn. I went out to my car to get something and knew immediately that the odor was in the garage and not the barn. I had to know whether the cats had been skunked.

I followed the odor as I walked around the huge garage. It always led me to the open trash cans, and there was the skunk, at the bottom of a nearly empty can. I panicked and raced into the house, slamming the door shut. I called Amy and she said to use a large stick of some type to tip the can over so that she could escape.

I did this but not until after I had gotten the cats in through the back door, moved the other cans away from the skunk can so that I had room to tip the can over, and closed up the car windows. I began to piece the skunk's dilemma together: she had come in last night (or even an earlier night!) to find trash. Climbing the three steps to the stoop in the garage at the house door, she had fallen in the can because there was only one bag of trash at the bottom. Now she couldn't get out. When I had tossed in the heavy bag after school she had skunked the can because of fear and pain. Obviously I had walked past her several times that day and she had never given away her location until I had hurt her. 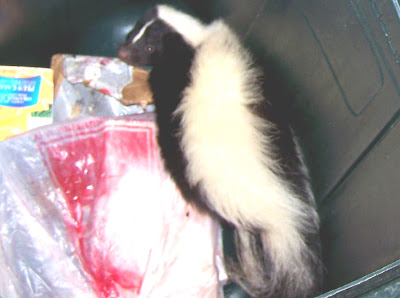 Before I tipped the can I took these photos of her. I did not peer inside. I stood in the house and stuck my arm over the can, holding the camera as close as I dared. I gave the camera a lot of time to focus and then snapped the shots.

After I tipped the can, she would not leave. I opened the third garage door so that the noise would scare her and she finally ran. Instead of going outside, though, she ran to the darkest corner of the garage: the far back of the third bay in front of where my car was parked. I gave her a few minutes and then ventured out again but she panicked and I heard scratching like a panicked cat trying to climb a wall. I left her alone for an hour while I continued packing.

Realizing that she was as scared of me as I was of her, I decided to toss my stuff quietly in the car and leave. Being nocturnal she would most likely leave during the night if I left one garage door open a bit as for a cat. I called Amy and asked her to come down this weekend to let the cats out and make sure the skunk was gone (and how do you do that? I have no idea!).

The skunk looks very sad in the photos. But she will be OK and have many more nights out in the yard grubbing while the cats hunt and sleeping under the barn.