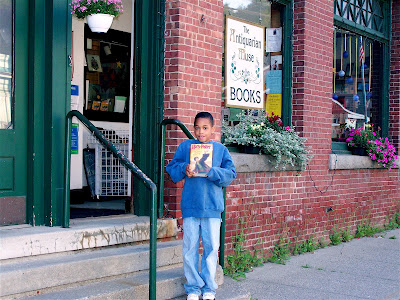 Wingnut with his new HP7 in front of the Galaxy Bookshop, Hardwick
I did the Harry Potter

thing and to tell the truth I am glad I did. At last I was a part of our American popular culture. Our Vermont experience of American culture is a bit different, though.

I took Wingnut to Hardwick for his book at 5 AM on Saturday morning. The Galaxy Bookshop was going to open at 6 AM. They had an ample supply of books to sell so I did not need to reserve a copy. The national "will-I-get-a-copy anxiety" does not exist here.

Wingnut was excited the day before. But not at 4:30 in the morning. He had spent most of the night reading his Lemony Snicket

book so he had maybe four hours of sleep. He stumbled about while I hopped about (I had been up since 2 AM, which was accidental because I had read the clock and thought it said 3 AM).

Just as we left the driveway my doe crossed the road. We took about five minutes waiting for her to stare at us, cross the road, and then sit in the tall grass and watch us. Even I was too zonked from only 3 hours of sleep to grab the camera. 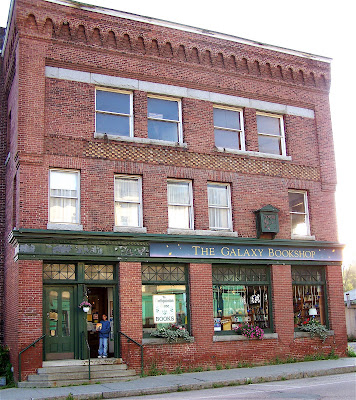 Wingnut with his new HP7 in front of the Galaxy Bookshop, Hardwick
We were at the bookstore at 5:50 AM (25 miles). We were the only people on the street. Wingnut were concerned that we had the time or place wrong (OK, we did have one short moment of will-I-get-a-copy anxiety). I saw people inside the store which reassured them. The Lamoille River runs through Hardwick and is directly behind the bookshop. I went to look at the river but Wingnut needed to keep an eye on the door of the shop.

At 6 AM sharp they let the hoards of young readers in the store (Wingnut). Immediately one other young man from the neighborhood showed up. I was fascinated to see that the clerks at the store had already read three-quarters of the book over night. I paid. Another neighborhood resident showed up on his bike. I left to take photos.

More traffic: a young mother with her daughter, a couple from Massachusetts looking a bit frayed at the early hour, and second young mother. The Mass couple got two copies. Wingnut came out for photos, and we went to the Village Restaurant for breakfast. One of the young mothers was there with her brood. Her boy and Wingnut read HP7 while we ate. We were home by 8:30 AM. Just in time for me to nap until noon.

A very pleasant excursion was had by all. 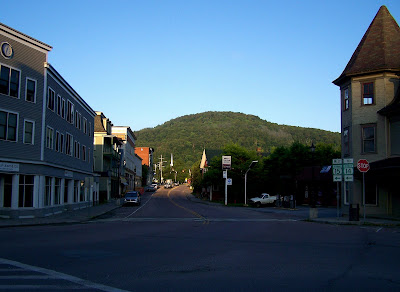 Hardwick at 6 AM on a Saturday morning.