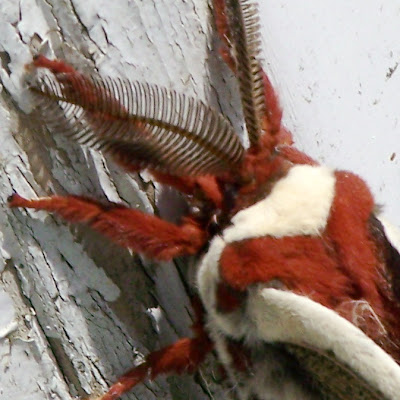 Tuesday, July 3: I was washing the downstairs windows outside. Wingnut was washing screens and collecting the cats' kills in the door yard so we would not step on them. Wingnut was also in charge of the camera. 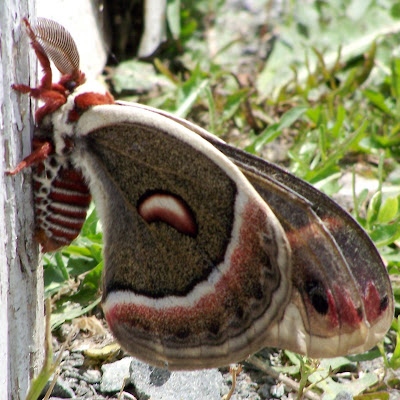 When we were almost finished, Wingnut came flying from the back of the house hollering about a moth he had photographed. We confirmed it was a moth (the antennae had no knob on the end and Wingnut had remembered that from the other moths I have had identified) and he told me it had flown far away. I then forgot about his moth until I downloaded his photos from the camera that afternoon. These are the photos I saw! 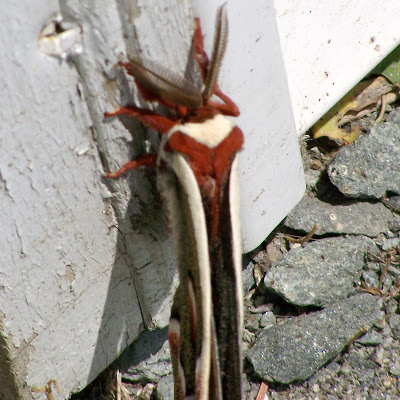 We tried to identify it at bugguide.net but were overwhelmed by the many species of moths. I then submitted it for identification. We received responses within five hours.

This is a male Robin Moth - (Cecropia Moth) - Hyalophora cecropia. It was identified by GypsumWolf whose Flickr photos can be seen here. Today (July 4) I learned from Dany Brown that Wingnut's robin moth is a male because the antennae are so large. Dany's website (French) is here. Dany adds:

The one on your photo is the male.
The one on the demo do seem to be a female.
The critera to differenciate the two is the antena. They are very large and feathery for the male and much smaller, yet still feathery for female.
Those large male antena are believed to allow him to sense the pheromones emited by a calling virgin female at up to a kilometre away. Some sources i've read talk of ten kilometer if the winds are good, but i don't have any hard evidence suporting such a claim. 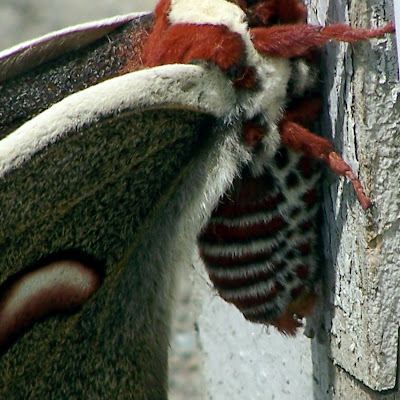 We further learned from the robin moth page on bugguide.net that it "[a]ppears to be declining, likely due to parasitism by a tachinid fly, Compsilura concinnata, introduced to control the Gypsy Moth (2)."

I am so proud of Wingnut! He is proud, too. All of these photos were edited and/or enhanced under Wingnut's supervision. 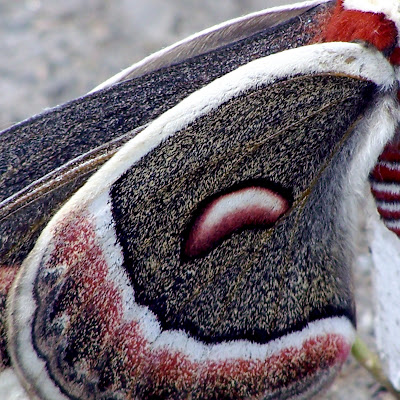 These are important photographs because of the declining numbers of robin moths. 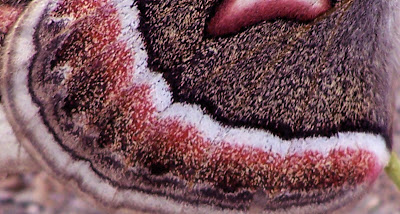 Wingnut was understandably fascinated by the patterns on the moth's wings. Wingnut is 11 years old.