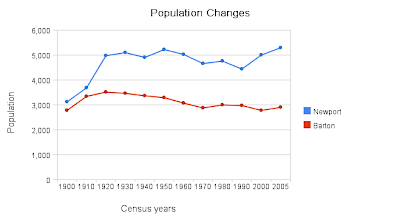 I had to compile some census data for Newport City for my class this coming Tuesday night. The US Census site is difficult to use for historic data but Wikipedia had what I wanted. The data only went back to 1900 but it was enough for the exercise that I want the class to do. Whoever wrote the Wikipedia page (and I don't even know enough about Wikipedia to find that information) has my thanks.

DataFerrett is a census tool that I downloaded but it is buggy and non-intuitive and I really don't have the time to read all the docs.

I have made the data public so that we can view it and use it in class. Google comes through for me again: no sending of files, no more making jpeg files from PDF files. I just made it and published it. I still worry about Google being too big for its britches.