Click on all the photos to view them large in a new window. 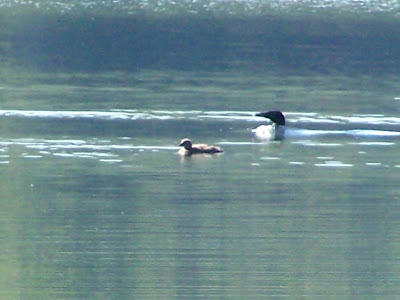 On our second loon expedition on Saturday morning, we found a family of five: three adults and two babies. They live on Long Pond in Westmore, Vermont. This is the first time I have ever seen a loon. I have heard many of their distinctive calls. Loons live three miles from me on May Pond but the access is poor. Long Pond is perhaps six to ten miles from me with access to two sides of the pond for viewing.

When the babies are very small, the parents will carry them on their backs. That is why the loon population is so fragile. Motor boats are an especial danger to them and the state will prohibit access to loon nesting sites. The island these loons nested on can no longer be reached because they live there. 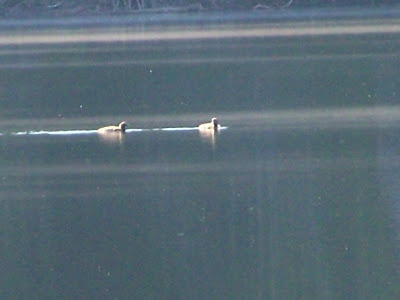 Loons can barely walk on land because of the placement of their legs on their bodies. It helps them swim very well, but not to walk. They are extremely vulnerable on land. 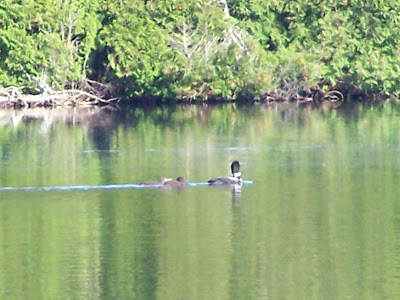 These photos were taken with full digital zoom. They are not as good as I had hoped. But they are my first! I'll get better. You can see all twenty-two of my loon photos in my Flickr: Loons set.

As if it couldn't get any better, we also saw two peregrine falcons (Falco peregrinus) hunt and attack a bird fly with a young falcon in the sky on the north end of the pond. The sequence of the attack wasThey were flying so quickly that my camera had no time to focus. We saw two endangered and protected species in one day. Can it get any better?