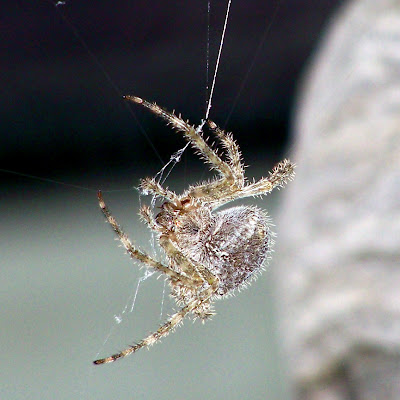 I don't think this is a barn spider because of the pretty furry cat-like marking on its back (see today's photo of the day for another view of it). I have submitted an ID request to bugguide.net. Be sure to click on the photo so that you can see it full size. This one spider, which is pretty big, is making a web around the damaged hornet nest that I have been chronicling this summer. But the web is not enveloping the nest: it is around it, so that when the hornets fly in or out, they could get caught. Two have died so far. The nest is still active but does not seem as healthy as it did. The eggs that were visible when it first broke are now a darker color.

My day wasn't the best day. My trip to Rutland had to be canceled because of the weather (mostly). The heat here was bad: a high of 83°F (28°C) with a dew point so high that my bathroom mirror was fogged up all day and the linoleum floor was actually wet. Rutland, I heard, was over 90° (32°C).

The storms this afternoon were very bad. The first one blew in directly from the north, over the mountain, and woke me from my nap. I watched as the clouds descended and the sheets of rain advanced. The lightning was dangerous again: constant flickering in the sky. The thunder echoed eerily this time, sometimes it sounded like a roar. A different roar than the wind was making.

There was a lightning strike on my property again. When it happened, I heard a huge POP and of course I lost all power. But it was out for only about two hours. It came back in the middle of the second storm.

Buddy and Charlie were out there somewhere in the weather. Zorro had the sense to come in where it was safe.