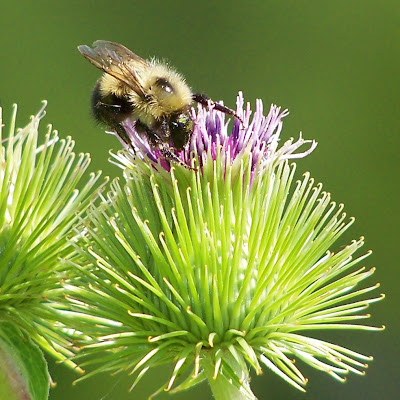 I have used my own photos of bumble bees on common burdock (Arctium minus) to accompany the quotation from the Stokes about bumble bees and their pollen (used with permission). 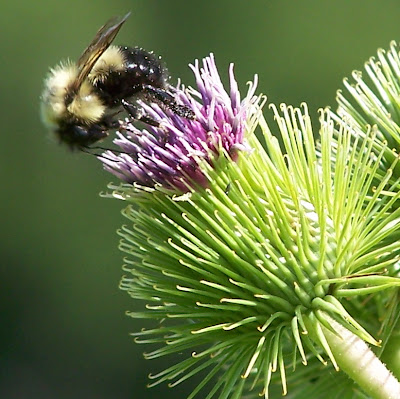 Bumblebees are our only 'social' native bee. They overwinter as fertilized adult females, or queens. These emerge in early spring and start a nest by choosing an existing underground cavity, such as an old chipmunk burrow, collecting pollen into clumps, and laying eggs on the pollen. The pollen and eggs are covered with wax, and the queen sits on them, keeping them warm while they develop. The eggs hatch in four to five days. The larvae feed on the pollen, and in about a week pupate in tough cocoons that they make. During pupation, which lasts about ten days, the queen takes off the wax that is covering them. The emerging adults are sterile females, and they take care of the subsequent broods during the summer. In later summer, the queen lays eggs that develop into fertile females and males. These leave the hive, mate, and the fertilized females overwinter. All other members of the colony die. The next spring the process starts over. 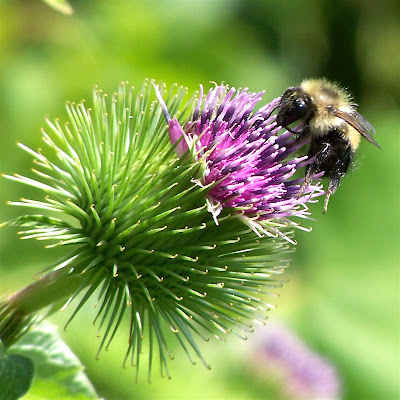