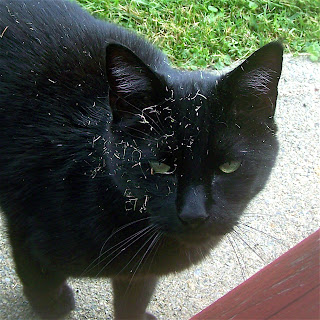 Zorro had just rolled on the front stoop after Jon had mowed, covering himself with grass clippings without shame. Messy cat! Sometimes he comes home covered in cobwebs and doesn't mind that.

A series of unfortunate events the past few days have left me far behind with my work. I already told you about the code problems in the template. There are still a couple of problems because Dorothy and Ruth are having intermittent problems logging in.

Amy came by with mid-season flea treatments and to help with Pansy's claws. Pansy was born with skeletal birth defects and her claws can grow into her foot. We have to be gentle while clipping her so that we don't harm her. Yet she turns wild when her claws are done so gentleness is a trick.

Amy also took three cats out. Mouse had to be shaved at Amy's kennel. But the most distressing news is that two cats (Possum and Turnip) had to go to the hospital. Turnip has lost weight and Possum is behaving as if she is in heat. I am not worried about them anymore, though (I was convinced, without knowing what was wrong, that they would have to be put down). The vet has run blood tests and Amy is medicating them at the kennel. They will be home when that is done.

The problem with having rescued and/or feral strays is that medicating and treating them can be overwhelming. I don't know what I would do without Amy, who knows how to handle wild cats, and her kennel, where they can be confined so that they receive the full course of meds that they need. Pansy was so lonely with the others gone that she broke our hearts with her meowing and calling for them half the night. 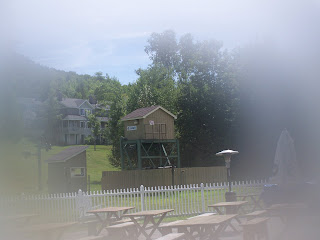 What else could go wrong on a beautiful summer day in Vermont with those famous blue skies perfect for photography? I decided to go to Burke Mountain so that I could take photographs. I was cleaning my lens and stupidly dripped cleaning fluid onto a horizontal lens.

The fluid leaked inside and my lens was wet (see left photo). There was nothing I could do to fix it. I was sure the camera was ruined. I wanted to go immediately to New Hampshire (no stores here, remember) for a new camera (forget paying bills!).

Back at home later, I found I could take macros and use judicious cropping for other photos (see right), so I calmed down. I went to a concert after supper but the lens was still wet. I also lost my car keys yesterday but found a duplicate, which did not open the car doors. Fortunately, I tested the key on one locked door so that I did not get locked out of the car.

I picked Mousie up from Amy, got ice cream and came home. And the lens was dry!

At this point, it is not even worth mentioning the other unfortunate events: the power outages, connection problems and the flooded upstairs bathroom. 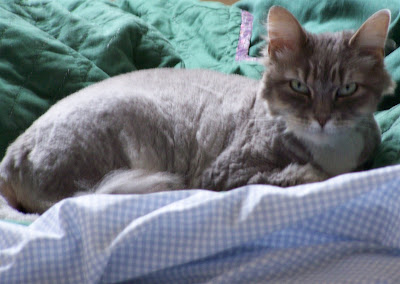 Naked Mouse taken this morning. She has forgiven me.

Today I am going to Dixville Notch to try to find a moose!