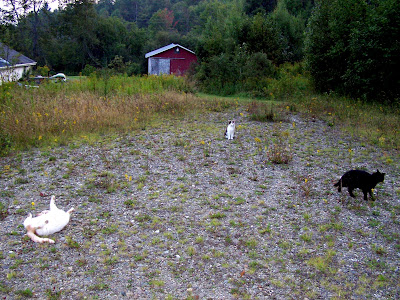 You may remember me writing that Buddy loves to walk in the woods with people. Late this summer, the other two Bad Boys began joining me. There is an area above my house that is flat and gravely, which is where you see the three of them here. You notice they keep their distance from each other (Buddy and Charlie hate each other). What was fun with only Buddy is now more fun with all three of the boys. 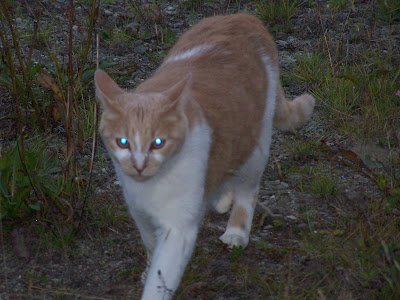 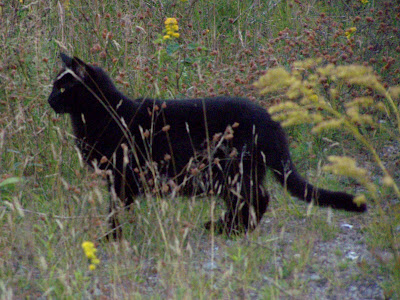 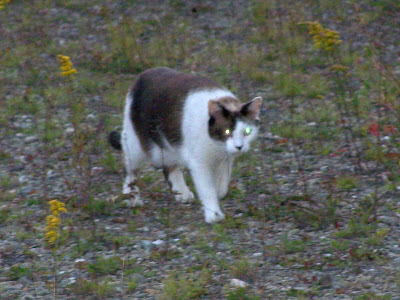 In other Bad Boy news: On the great Labor Day Weekend reunion, we noticed that the red squirrels were screeching at us while we sat outside in the front door yard. We have lived peacefully enough with these tiny squirrels all summer without a problem so we did not know why they were so furious with us. Red squirrels are a bit larger than a chipmunk but don't have the chipmunk stripes or tail. They are very aggressive, nasty and tiny animals and make quite a racket when upset. They often invade houses and live in attics over the winter.

While photographing spiders in the back this week, I found out why they were angry: there was a long-dead red squirrel under the kitchen window. It had obviously been left as a gift the past weekend when its relatives were hollering at us.

I delayed disposing of the poor thing. I usually get a shovel or rake and take all the cat kills into the woods to provide food for other animals. Too lazy to walk all around the long house to the garage, I let the little dead squirrel just lay there. In the meantime, some more kills accumulated at the front door.

Jon mowed late last week. And he disposed of all of the kills before he mowed. I have to thank him because it is a nasty chore that he must have done many times all summer. There have been four star-nosed moles, more birds than usual, uncounted shrews, voles, jumping mice, field mice, one bat and one red squirrel. The cats had a very productive summer.

Happy COT! The fall college semester has begun so I won't be able to visit your posts until late Tuesday night and Wednesday night (we can't blog at work! Can you imagine?)