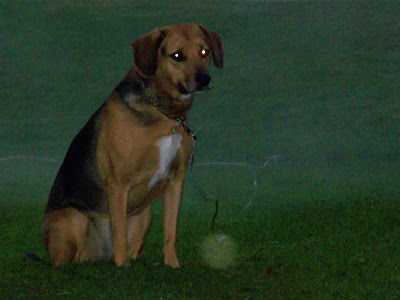 Sophie is Amelia's three and a half year old Vermont Beagle. Amy found Sophie at Frontier Animal Shelter in Orleans. Amy stopped by the shelter once a week for six weeks looking for a companion for Scout, her first Vermont Beagle. Finally Sophie showed up and Amy had her dog. She took me and Wingnut to meet her and we fell in love with her. We took her home that very day. Ever since, Sophie has given us a supreme test of tolerance of poor dog behavior. Sophie has at least one behavior disability but has not been behaviorally assessed. Ninety-five percent of other people would have had Sophie put down or given her away or abandoned her.

But Amy has taken her to obedience classes, fly ball class, agility class and tracking class. Sophie had a great time in all the classes but learned very little. Amy is determined: Sophie is continually under training to make her calmer, less anxious and more able to focus. This requires that Amy walk Sophie at least four miles a day to tire her, and to restrict stimulation from other animals (including my cats) and situations.

With proper and constant care, Sophie is a love. She runs up to bed before me every night. She begins under the bed, and within thirty minutes is under the covers. In another half hour, Sophie throws herself (throws for real) out of the covers and pants on top of the covers, where she sleeps until Amy goes to bed.

When I look back at Sophie's behavior two years ago, it is amazing what Amy's love and devotion have done for Sophie. Amy won't give up on Sophie and will care for this dog for the rest of her life. Sophie is a happier dog now. Sophie is my granddog.