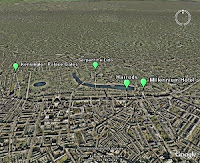 London - Our Temporary Playground at ‘Somerset’ Bob’s Place
Bob and Marcy spent a couple of wonderful, expensive days in London to see some shows and go shopping. There are photographs of Harrod's, the theater, and the gates at Kensington Palace where people left tributes to Diana (it being the 10th anniversary of her death).

I told Bob in my comment that his trip reminded me of my trips to Washington, DC. It is an expensive, huge city with history everywhere you turn. Bob's description of Harrod's created a dessire in me, of all people, to go shopping. There is also a curious Congestion Charge that Marcy and Bob had to pay because they drove their car into the city: it was £8 a day.

I went to Google search and typed "convert 8 pounds to dollars" and it returned that £8 is $16.1264 U.S. Approximately two U.S. dollars for each pound. Bob lives approximately 140 miles from London and I learned that a "British mile is the same distance as an American mile but a British pint is an imperial pint, 20% larger than an American pint." Here's a country I can deal with easier than my neighboring Canada (which is metric). A shameful confession for a math teacher.

One more thing: Bob always gives a kmz file on his posts for you to download so that you can use your copy of Google Earth to tour these places yourself.

Somerset Bob always writes Google Earth Challenge posts that are so intereseting you want to go visit the places yourself. Go and read!