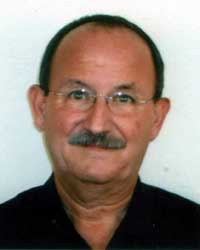 Lacking family connections, he developed a brother-sister relationship with both Robin Rothman of Danville and Celine Dudemaine of Ayers Cliff, P.Q. David was a psychotherapist with Northeast Kingdom Human Services in both St. Johnsbury and Newport. Recently he had been working with troubled children in northern schools like . . . .

David wrote poetry and read omnivorously. He fended for himself starting early in his life and was somewhat of a rolling stone, deciding on a career in psychology. He put himself through all his education up through obtaining his master's in psychology and social work.

David came from a military family. As a boy he lived in North Carolina, Texas and Massachusetts, and later again in Massachusetts, Colorado, and the Albany N.Y. area. He worked a variety of jobs beginning in his teens: He ran errands, operated the telegraph, cleaned houses, managed a bar and even an art gallery. While working on his master's, he oversaw a psychiatric nursing home.

David began working with Northeast Kingdom Human Services in the mid-1980s. He tended bar a few nights a week at the Rabbit Hill Inn. His main enthusiasms were reading, studying French, which he taught himself, and talking to people wherever he went. David was particularly interested in religion and spirituality and read extensively on those subjects. He adopted Judaism as the religion most compatible with his beliefs and origins.

He practiced his French in Quebec. He became enchanted with the culture and moved to Coaticook about five years ago and was working on obtaining permanent Canadian residency.

Graveside services will be held Monday, Sept. 10, at 11 a.m. at the Danville Green Cemetery on Brainerd Street. Rabbi Tobie Wiseman of Montpelier will officiate. Anyone wishing to attend is welcome.

The Caledonian-Record is a daily newspaper serving Northern Vermont and Northern New Hampshire. Visit our website updated daily at www.caledonianrecord.com


Note from the WebMaster: We request that you maintain proper credit to the Caledonian-Record Online News and to the author of the article. If you post this news article on your website we also request that you include a link to our website, which can be accomplished by using the following code: