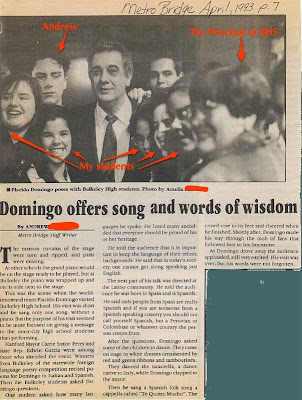 In 1993 I taught a sixth grade of Puerto Rican, Vietnamese, African American, Jamaican, and Portuguese children. My husband (who died 13 months later), another teacher and I transported all who wanted to see Domingo on this Saturday. The event was empty except for us, some high school students, my own children, and the principal. It was a very informal meeting and we actually shook hands with this magnificent tenor and humanitarian. My Amelia photographed it for the Hartford Courant and my Andrew wrote the article. I scanned the article years ago and found it tonight. If you care to see, when you click the photo will be large and you will see that I have identified people in the photo. The text of the article follows:

The maroon curtains of the stage were torn and ripped, and parts were missing.

At other schools the grand piano would be on the stage ready to be played, but at Bulkeley the piano was wrapped up and on its side next to the stage.

This was the scene when the world renowned tenor Placido Domingo visited Bulkeley High School. His visit was short and he sang only one song, without a piano. But the purpose of his visit seemed to be more focused on giving a message to the inner-city high school students than performing.

Hartford Mayor Carrie Saxon Perry and State Rep. Edwin Garcia were among those who attended the event. Winners from Bulkeley of the statewide foreign language poetry competition recited poems for Domingo in Italian and Spanish. Then the Bulkeley students asked Domingo questions.

One student asked how many languages he spoke. He listed many and added that everyone should be proud of his or her heritage.

He told the audience that it is important to keep the language of their ethnic backgrounds. He said that in today's society one cannot get along speaking just English.

The next part of his talk was directed at the Latino community. He told the audience he was born in Spain and is Spanish.

He said only people from Spain are really Spanish and if you are someone from a Spanish-speaking country you should not call yourself Spanish, but a Peruvian or Colombian or whatever country the person comes from.

After the questions, Domingo asked some of the children to dance. They came on stage in white dresses ornamented by red and green ribbons and tambourines.

They danced the tarantella, a dance native to Italy, while Domingo clapped to the music.

Then he sang a Spanish folk song a cappella called "Te Quiero Mucho." The crowd rose to its feet and cheered when he finished. Shortly after, Domingo made his way through the mob of fans that followed him to his limousine.

As Domingo drove away the audience applauded, still very excited. His visit was over, but his words were not forgotten.

The memories of that intense year are vivid within me. There were awful times but also these wonderful times. I am proud that I was able to get all my home and school kids to see Domingo.