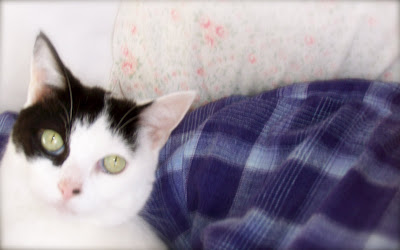 This summer, Turnip was very ill. He had gradually lost weight, his stools were loose and bloody, and he had barely any control over them. At the end of summer, he spent a few days in the hospital and they found he had a bad liver count. He then spent two full weeks in a kennel in the city because he could not receive the medication (he hides here when it's time for meds) or the prescription food he needed because of the other cats. For Turnip, these three weeks away from home were full of terror. He is an affectionate, quiet homebody.
He came home a bit plumper and healthier but within two weeks he was worse than before. He refused to eat his special prescription food. He was crying in pain and became thinner than he had been before. By the time Labor Day Weekend arrived, Anna and I were discussing doing the unthinkable and putting him to sleep so that he would no longer suffer his obvious pain. I could not justify sending him back to the vet or the kennel for treatment because his terror was heartbreaking.

But after Labor Day, my source of Wellness cat food dried up. I then bought what all of my cats had been weaned on: Nutro Max. Within one week, Turnip had gained weight, his stools were normal, he was sleeping peacefully, and was a part of the household again.

Turnip was not "sick": he had suffered a severe, life-threatening food allergy. The vets never diagnosed this. None of us had a clue. The photo above is from Sunday when Turnip was reading in bed with me, in the crook of my arm, purring and warm. My Turnip is back and without any pain. Be careful if you switch your cat food.

Thank you for coming. I wish you peace for the upcoming week.