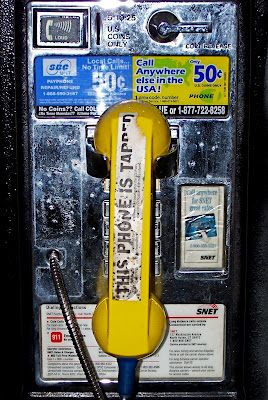 I spent the entire day from noon to 6 PM driving to New Haven, Connecticut — approximately 275 miles south — in order to visit Anna and Aaron during our long Teacher Convention weekend. It was awful from Massachusetts on. The rudeness, hostility, paranoia and anger everywhere emphasizes the tolerance and peace of Vermont. The filth, noise and pollution are also huge. I stopped in Wallingford, Connecticut to get a Coke and found the pay phone which I photographed and posted above.
I saw several animals that had been killed by cars on the highway: two skunks, a deer, a dog, a raccoon, a cat. But the saddest sight was when I drove by a coyote that had been killed and was lying on the shoulder of the highway. It's mate was sniffing the body and walking in circles around the dead coyote. It broke my heart.
Technorati tags: I-91

Email ThisBlogThis!Share to TwitterShare to FacebookShare to Pinterest
Labels: Anna, I-91, New Haven