Wal-Mart and the Battle of Vermont - The Boston Globe 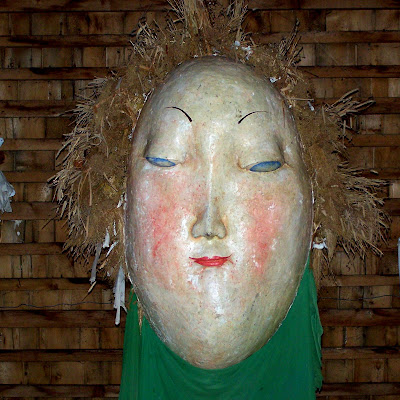 A mask from the Bread and Puppet Museum, Glover.
Wal-Mart and the Battle of Vermont - The Boston Globe

Half the play is set in 2037, when only armed guerrillas from Vermont, led by dictators Ben and Jerry, are opposing the Wal-Martification of the United States. Instead of teaching children to watch television at School-Mart, a rebellious Vermont teacher instructs his charges how to make puppets, and so on.

I got a kick out of the reference to the Bread and Puppet. A few details of the history of Walmart in Vermont are wrong but it's interesting. Some folks are trying to get a Walmart into Derby so that we can get our underwear locally instead of in New Hampshire or Quebec.

It would be a crime for them to succeed. Why? Read Nickel and Dimed by Barbara Ehrenreich

Technorati tags: Walmart Derby+Vermont Bread+and+Butter
_/\_/\_
Posted by Andree at 10:10 AM