Why I Oppose Wind Farms 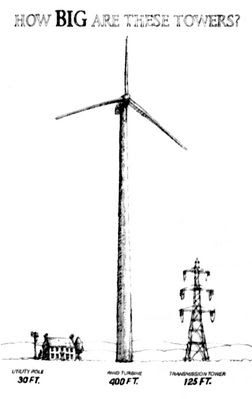 Last Wednesday I posted a photo of a residential wind turbine used at a local school for their electrical needs. I don't know too much about the impact of residential turbines, but I have learned a lot about the huge (430 foot tall or 131.1 m) industrial turbines that UPC Wind wants to build on Hardscrabble Mountain in Sheffield (visible from Barton).

Several people have expressed an interest in knowing why I oppose wind farms and signed the petition in Barton.

UPC Wind, from Massachusetts, has targeted Vermont for development. The local opposition group is Ridge Protectors in Sheffield. There are similar groups all over the world. The site I read most is National Wind Watch. I have decided not to rehash the arguments against the wind farm because each of these sites provides pages of data. I have chosen to mention the objections (in case you have not heard of them) and then add my own personal opinion. I have read and listened to both sides of this debate.

The turbines are documented to have negative impacts on the wildlife where they are built (particularly bats). They are noisy (read testimony from Mars Hill, Maine here), subsidized by tax incentives, and produce little power to justify the destruction of wilderness areas. If you are actually interested in the debates, be sure to read as much as you can.