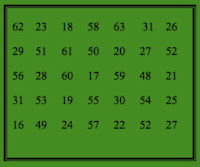 Every year I give my students a puzzle to make and take home. I choose puzzles that will amaze their families and friends. This year we will make these guess-the-number-cards. After you print and cut out these cards, you give them to a friend. You ask them to think of a secret number between one and fifty. Then have them give you back any card that contains that number. 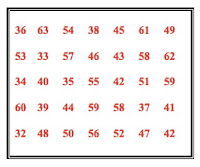 Wild About Math has another version of this trick here that you should check out. 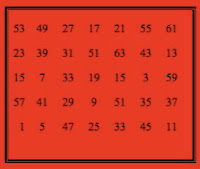 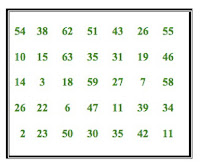 You can see that their are many lessons here. I could connect this game to Egyptian and Russian Peasant multiplication. But I'm leaning towards using the Towers of Hanoi game as an extension. 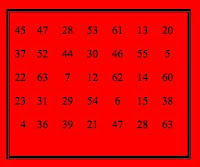 The Tower of Hanoi (sometimes referred to as the Tower of Brahma or the End of the World Puzzle) was invented by the French mathematician, Edouard Lucas, in 1883. He was inspired by a legend that tells of a Hindu temple where the pyramid puzzle might have been used for the mental discipline of young priests. Legend says that at the beginning of time the priests in the temple were given a stack of 64 gold disks, each one a little smaller than the one beneath it. Their assignment was to transfer the 64 disks from one of the three poles to another, with one important provisoøa large disk could never be placed on top of a smaller one. The priests worked very efficiently, day and night. When they finished their work, the myth said, the temple would crumble into dust and the world would vanish 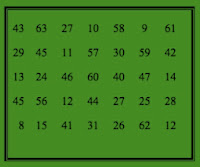 What does this game have to do with our number guessing cards? Read on and you shall see. The legend mentions that 64 disks are used. You can't possible play with all sixty-four disks. The game usually comes with up to seven disks. There are wooden versions with seven disks that you can buy here (the source of the Legend of the Towers of Hanoi above.) You can also play online at many sites.

Solving this game with even seven disks is daunting, so suggest to your children that they use the problem solving strategy of making a simpler problem. As they solve from one to two to three and greater number of disks, they will begin to notice patterns in how to move the disks. 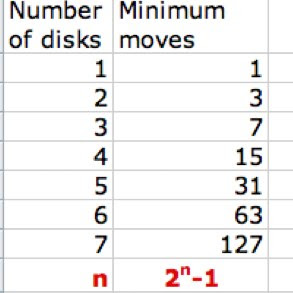 Do you see that this game is about the powers of two?

Have your kids make a table like mine (perhaps without the algebra) if it is age appropriate. What are the differences between the minimum number of moves? Hopefully they will recognize that the differences are also powers of two and that will help them write either a recursive or general rule. They can then challenge themselves to solve the seven disk puzzle in 127 moves.

A screen shot of my favorite online implementation of the Towers of Hanoi from NLVM: 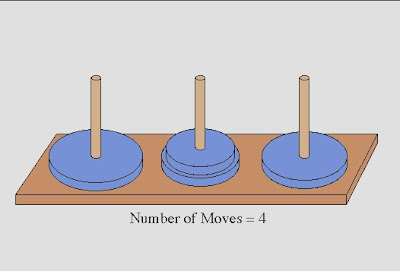 Our last activity is to figure out what the value of 2^64 is. If the monks were able to move a disk a second, day and night, without stopping, how long would it be until the world came to an end? I give everybody calculators and let them loose with it. Last night, I found a wonderful tool to help them learn and practice conversions: the unit conversion tool from NLVM. This tool is probably inappropriate for most elementary students, but it's a neat place.

Kids being kids, there is a part of them that will think it marvelous that they are part of predicting the end of the world. The problem is that unless you do it also, you will never know. You will have to provide benchmarks or checks along the way so that the kids don't become lost in these huge numbers. While researching this article, I found two different answers to this problem (I have decided not to link you to them). This doesn't speak too well to our mathematics on the Internet. So be bold and do it yourself! I calculated the correct answer. Is there any relationship between the legend and the actual age of the earth? Of the solar system? Of the universe?