I woke to the alarm this morning. I had stayed up late last night because the incoming storm guaranteed a snow day. My alarm rings at 5 AM. The same moment that the principal called. I can't hear the phone upstairs (and there are no upstairs phones because Charlie has eaten over $100 of phone cords). Principal called back five minutes later. I made my three calls on the snow tree. And then the day was mine.

The graphic above (from NOAA forecast page for Barton) shows a typical winter week here. We don't always have these huge storms, but there are always snow flakes in our weather graphics. It's going to be a warmer week this week. This past weekend, the temperatures dropped below 0°F (about -18°C). 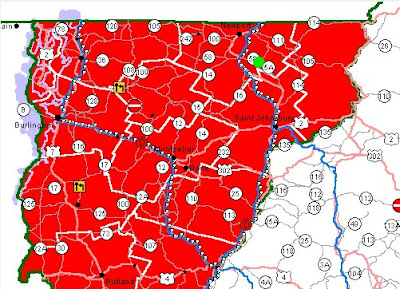 This huge red graphic is the second thing I check every winter morning. It is the NEK Roads map. NEK means Northeast Kingdom, my section of Vermont. Red is bad. I put a green dot where I live. The map is interactive. If you click on a symbol, it gives you details.

Today I found that the NEK Roads site has included a map of all of northern New England. I can't decide whether New Hampshire (the white part) does not report or whether they never have any road problems. I've driven in New Hampshire. They have road problems. Maine is being hit bad by this snowstorm, so we know why their roads are bad. 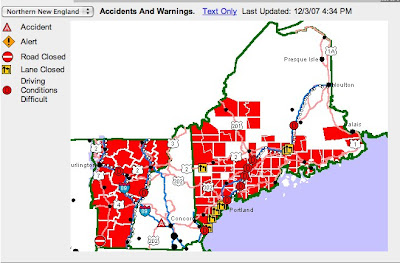 Finally, below, is NOAA's map of the predicted snow depth for Vermont by 7 AM ET Tuesday, Dec. 4. I don't believe it. It already is about one foot deep and another whollop of the storm is coming in the morning. I put a green dot on Barton (13.1" predicted, or 33.27 cm). For context: the grey on top of the pink Vermont is Québec, Canada. The grey to the right of pink Vermont is New Hampshire. The blue is partially in Vermont and partially in upstate New York. The blue below the pink is Vermont.

So what did I do today? Ate, napped, read a lot, blogged, watched soaps. I chatted with people and broke up cat fights. The most exciting thing is that I had at least five species of birds in the tree today, including a new bird to me. There were chickadees, downy woodpeckers, blue jays, white-breasted nuthatches, and the new bird — common redpolls. Watch this blog and Barton Daily Photo for the bird photos. Processing the photos on the computer took hours. Oh, and I found a lost book.

I'm thinking we'll have at least a delay tomorrow, but it's difficult to tell what the roads are like down below.
_/\_/\_
Posted by Andree at 5:15 PM