Be Careful What You Wish For? A Northern Shrike 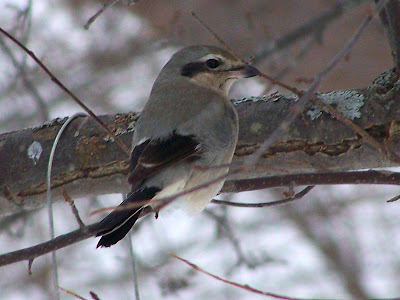 A Northern Shrike showed up this afternoon. It just sat in the bird tree all by its lonesome. All other birds and squirrels had run away (no doubt screaming). Why? The shrike is a predator songbird and it eats little birds and mice and hangs their dead bodies in the trees for snack time. 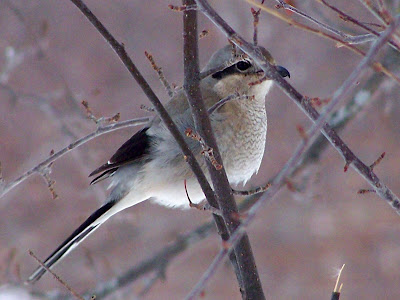 I have to thank Gilliam of Blossoms and Birdsong in Ottawa for her confirmation of my identification of this bird. Her comment can be read in the comments. She has also sent me an article, "Oh, No, There's a Hawk At My Feeder", which gives valuable information on what to do if a predator stops by. 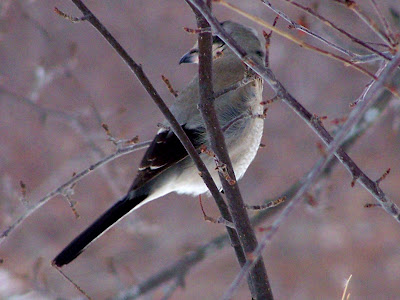 According to the Cornell Lab of Ornithology site, All About Birds, "The Latin species name of the Northern Shrike, Lanius excubitor, means 'Butcher watchman.' " Very descriptive. The shrike is such a pretty bird and yet is a butcher. 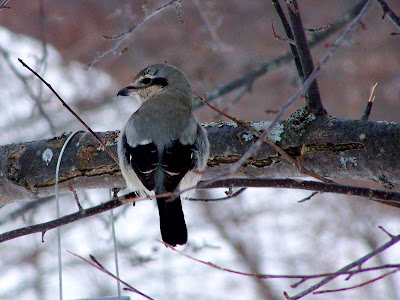 I took these photos from across the living room. I was afraid to get close to the window immediately because some birds (like mourning doves and unlike chickadees) will fly away when they see you at the window. Or when the camera's green light focuses on them. I did not know how the new bird would react, so as I crept across the living room floor towards the window, I kept snapping photos. When I finally reached the window, it flew to the other side of the tree and then flew away. 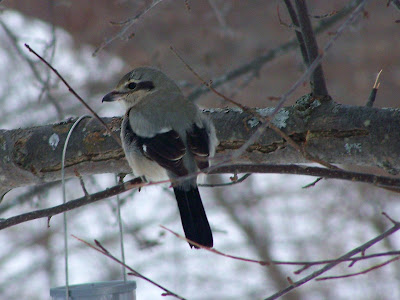 The sun set soon after the shrike flew away. The only animal to return was a mouse who appeared from a tunnel in the snow to eat the seeds scattered by the morning's birds. My photos of the mouse did not come out well at all. 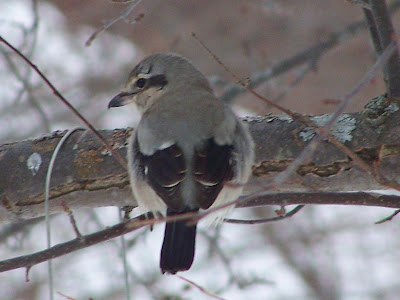 I am wondering if tomorrow anybody shows up. The blue jay might return, the mourning doves probably. But not the chickadees or squirrels. They know. And exactly how do they know? Can they recognize the shrike immediately? Have they had bad experiences with shrikes? I have never seen one before. 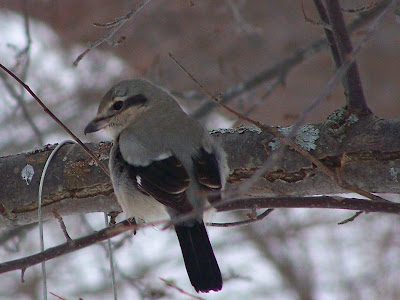 I hope my nightmare, of little dead chickadee, mice and squirrel bodies hanging from the bird tree, does not come true. 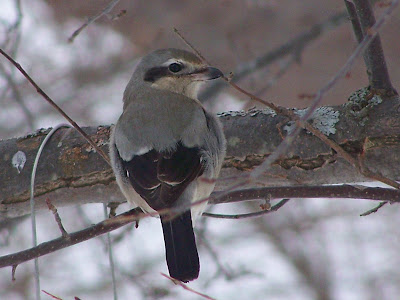 Be careful what you wish for. I had wanted new birds to show up in the bird tree because the delightful chickadees, woodpeckers, mourning doves and red squirrels were becoming boring. I didn't know that a predatory songbird would show up.
All photos open in a new window when clicked.