Book Review: The Geese of Beaver Bog by Bernd Heinrich 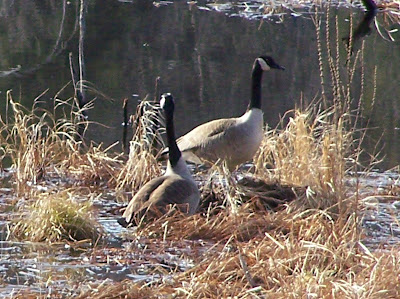 On April 22, 2007, I noticed a pair of nesting geese on the beaver ponds across the road. I was disappointed that they choose to nest here because I had been told they were aggressive and would make the ponds their own, chasing out other water fowl. That seemed to be confirmed when I saw that no mallards, wood ducks or mergansers nested here as they had before. I decided that I may as well take advantage of the presence of these birds and photograph their young when they hatched. These photos in this review were taken at 10x zoom. 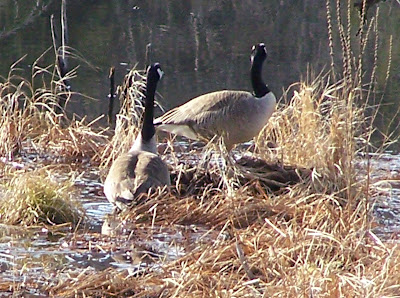 I saw the three goslings soon after they hatched (but was never able to photograph them), but only for a day or two. The family quickly disappeared. I was concerned that they had been eaten by fox or coyote. Then in July, Wingnut and I went to Crystal Lake State Park to swim and there was my goose family. They had integrated into life at the park and were eating and pooping very well. The goslings were nearly as big as the parents.
The park staff was asking people to not feed the geese, but were ignored. A ranger told me that they had to clean fifty pounds of geese droppings a day and it was becoming tiresome. It was impossible to walk barefoot as we usually do. But the geese were pleasant, not aggressive, and enjoyable to observe, especially since I knew that they were "mine." 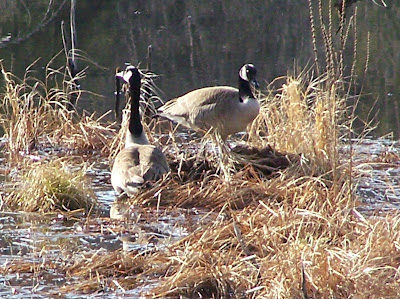 I have always wondered how the family got to Crystal Lake, a mile down the road and over at least one beaver dam and a huge falls at the Barton Waterworks. Why did they leave? Was the water at the beaver pond polluted in some way? Did the food supply in the ponds suddenly become scarce? Did the goslings walk or were they carried? 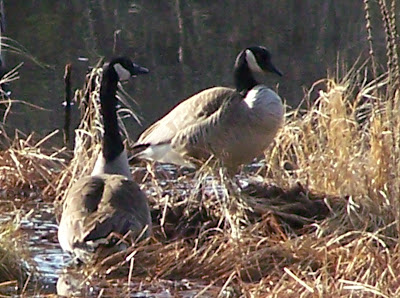 Heinrich wrote the amazingly personal and engaging book, The Geese of Beaver Bog,

about his observations of a group of geese from 1997 - 2003. Heinrich is a professor of biology at the University of Vermont. I have read his book Mind of the Raven: Investigations and Adventures with Wolf-Birds

(after observing ravens rolling in fresh snow) and have heard him talk about bees and other topics on Vermont Public Radio and National Public Radio. 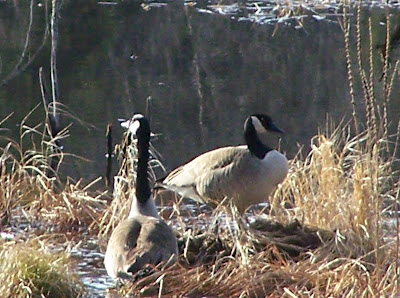 This book is a wonderful resource for me. Heinrich's experiences with his geese and beaver pond are remarkably similar to mine. We are both in Vermont, so the plants and animals are the same, and the bird populations are similar. Reading this book was like sharing experiences with a friend who doesn't only know the pond, but understands the excitement and sadness that I see here. He would feel as badly as I did when a crow stole a young redwing blackbird. Or when I heard the killing of a deer one night. He would chuckle at the scene of the coyote meeting a beaver face to face on the ice. 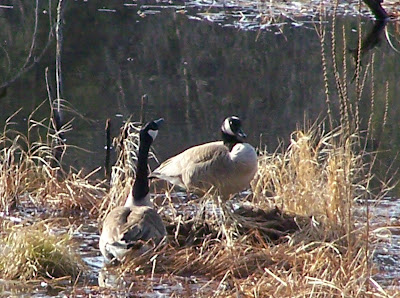 Canadian geese are precocial: they are able to be independent after hatching. The goslings are not fed by the parents. They mimic the parent's behavior and quickly learn what wisdom they need to continue surviving. And the parents do take the goslings to other ponds and lakes after hatching. The beaver pond, with its mink, weasels, foxes and coyotes, is not safe for the youngsters. Heinrich's geese walked two miles through cow pastures to a new pond. Mine walked through the woods where there were many dangers from predators that could not be easily seen by the parents. 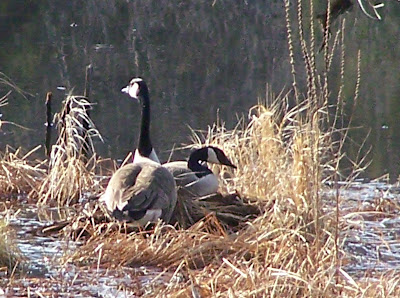 Geese will try to return to nest where they are born. So I will most likely be seeing geese here for some years to come. Geese pairs do not necessarily mate for life. They tend to be monogamous but life interferes with our plans: mates are killed, or are chased away. I learned about different groups of geese in North America ("races") and about their migration. 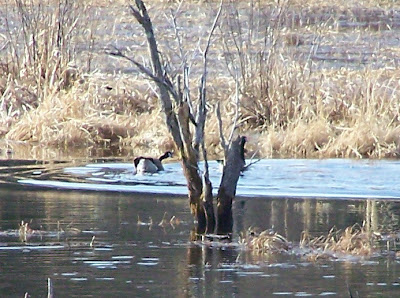 We tend to categorize animals as cute, smart, companions, pests, killers, unimportant — there is no end to how we judge which animals are worthy of living. But once we understand their complex behaviors and how they interact, we begin to identify with them and judge them worthy of living on earth with us. We are now concerned about the survival of mountain gorillas, wolves and other animals because of books and movies that personalize their lives. The Geese of Beaver Bog

personalized the natural lives of geese for me. It demystified their behaviors, asked questions that I would like answered, and removed the "pest" stigma from them.
I believed geese were nuisances but now that I know them better, I will protect their right to survive in the beaver ponds. I won't be hoping that they never return. I will be re-reading this book in the spring so that I am prepared to better observe, and enjoy, the behaviors of the geese.
All of these photos will open, full-size, in a new window when clicked.