I want to understand fractals better, and in the hope that somebody else also wants to, I am going to post each lesson that I complete. I have chosen to study the Introduction to Fractals: Infinity, Self-Similarity and Recursion published by Shodor. There's no special reason why I chose this lesson. But because I did, we will reviewing Zeno's Paradox. There are several paradoxes of Zeno but basically they argue that you can't travel anywhere at all because you can divide the distance to an object in half and in half again and again and never quite reach it. That is a very quick and dirty summary of the paradoxes. To learn the details, read the Wikipedia article Zeno's Paradoxes. More on the paradox in this lesson later.

First, we need to define some words. Keep these definitions around because we will be using them for the next five lessons. If there is a link attached to a word, it will take you to a Shodor "discussion" of the topic (in a new window). Since we want to start our learning nice and easy, we are going to read these discussions thoroughly.

Vocabulary
My Reading and Notes: 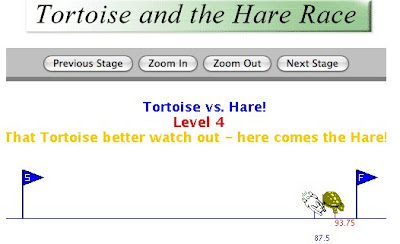 I played with the Tortoise and Hare applet and recorded the results so that I could complete the worksheet. I immediately recognized the race as one of Zeno's paradoxes and had a lot of fun with it. Here are my results: 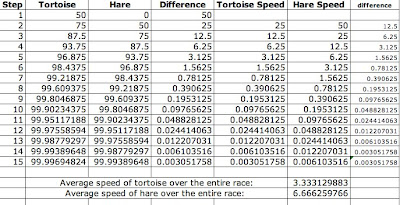 Neither runner gets to the finish line. The differences in speed and length run are powers of two. The rule seems to be to cut the distance in half in each time unit. My right-most column in the spreadsheet is not labeled or formatted correctly because it is for only one racer. If you drop the data down one row, the differences are identical for the hare. 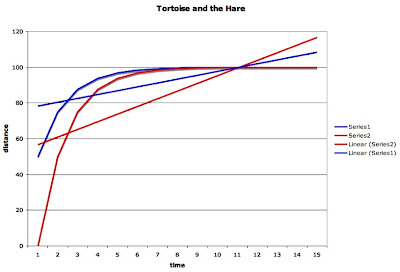 I knew the graph would be a curve and would approach one. I drew fitted lines for each runner and they intersected somewhere between 11 and 12 or something (I can't see it clearly and didn't take the time to figure it out but it would be easy enough). 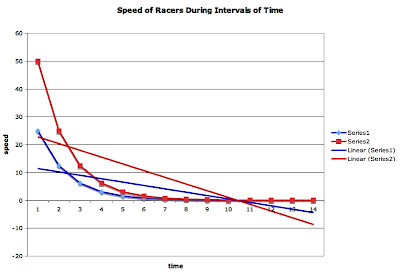 The graph of the speed of each runner: they approach zero. The runners' fitted lines intersect between 10 and 11.

Worksheet Questions:
Who is ahead after 5, 10 and 15 time steps? By how much? The tortoise is always ahead by 1/2 of the distance he was ahead by before.

Will the tortoise or the hare ever win? No.

Conclusion: each runner cuts his speed in half at each time marker. The distance between them decreases by half of the amount from the time before. They will never reach the finish.

This concludes Lesson 1, Activity 1 of my exploration of fractals. I had a lot of fun, reviewed algorithms, and learned a nice way to teach multi-dimensional trees. One of my favorite parts of this first lesson was the mathematics of dimensions (the Koch snowflake has a dimension between one and two). The math was easy but the concept bends my brain! Cool stuff. Wish I had a Zeno Doughnut!