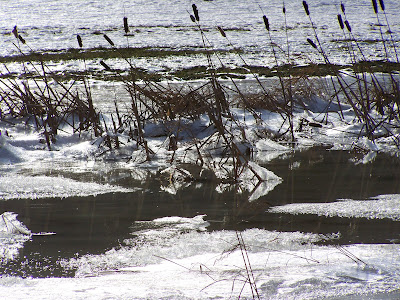 On January 10th, I took photos of what I thought was wind blown ice formations on the Missisquoi River during the January thaw. I was wrong. What I saw is more interesting than that. It is surface hoar, a type of hoarfrost. You can see it in the above photo at the edges of the snow. In the photo below, it is in the foreground and looks like diamonds in the sun. 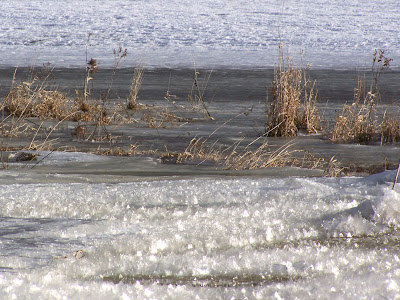 The Guide to Frost at SnowCrystals.com describes surface hoar:

The most common form of hoarfrost is called surface hoar. This consists of ice crystals that form on top of snow banks, usually overnight. The sparkles you see coming from a field of snow are often reflections off the facets of surface hoar crystals.

Surface hoar typically forms when a snowbank warms up during the day and is then cooled again overnight. The night air cools the surface of the snowbank more than the inside, so that water can evaporate from inside the snowbank and recrystalize on the surface. By morning the snowbank is covered with a layer of faceted ice crystals, and they can be quite large. These usually melt again once the sun comes up, so the best time to find surface hoar is early in the morning. 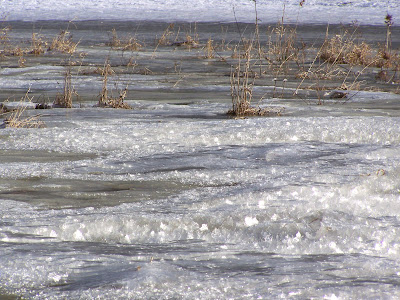 Surface hoar is a delight for our eyes.

Heads or Tails.
Thank you so much for visiting.