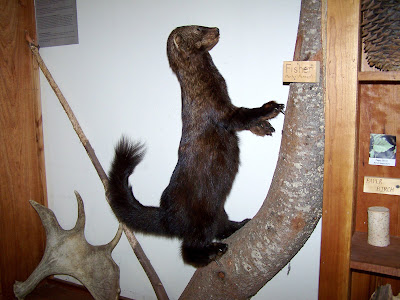 A stuffed fisher cat at the Northwoods Center

A few summers ago, at night, a fisher cat tried to break into the open kitchen window. The cats were going crazy trying to break out to get the fisher. I have a shotgun but I couldn't shoot without shooting my own cats. I have to get a rifle soon but have not done so yet. Every night all windows on the first floor of the house have to be closed so that a fisher won't break in. They love to eat housecats. 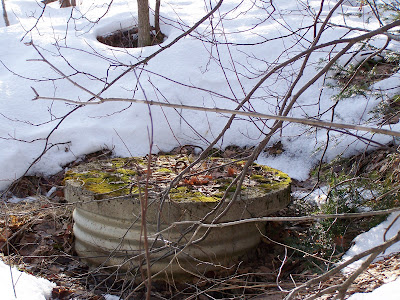 My spring fed well in the woods.

This wild and true story came to me from our former science teacher, who used to live in Charleston. A dairy farmer there has a spring fed well for his cows in the barn. The water was coming into the barn, yet the cows refused to drink it and were getting thirsty and their milk yield was dropping. Finally the farmer went out to the well to see what the matter was. He took the lid off the well and found a fisher cat drowned in the well. He left the top off the well, intending to return later. But he never got back there for a week. When he returned, he found ten fisher cats drowned in the well!